The drug is now legal under state law. 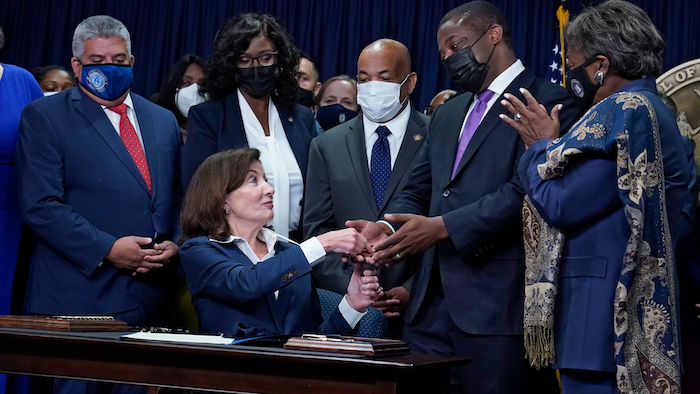 The “Less is More” law largely eliminates New York's practice of incarcerating people for technical parole violations, including being late to an appointment with a parole officer, missing curfew, or failing to pay fees or to inform a parole officer of a change in employment.

Starting in March, people on parole will land back behind bars only for drug or alcohol use if they were convicted of driving under the influence of those substances.

Supporters of the law say that New York has one of the the nation's highest rates of incarcerating people for technical parole violations, and that the practice is costly and fuels the cycle of people landing behind bars again after serving their time.

Criminal justice advocates applauded the law but urged Hochul and lawmakers to make it effective immediately.

That would "stop the unnecessary suffering,” said Shaun Whitaker, a member of the Katal Center for Equity, Health, and Justice, an advocacy group. “This bill passing will eliminate the fear of missing a call from my parole officer, or being late to a meeting. I won’t have to fear asking for help when it comes to substance abuse counseling.”

And the move means an estimated 5,000 people who are behind bars in New York for technical parole violations could eventually be eligible for release. New York City Mayor Bill de Blasio said the city will be releasing “hundreds and hundreds of people the right way.”

The governor said she's going to sign off Friday on the release of 191 eligible inmates from New York City’s notorious Rikers Island jail complex, troubled by years of neglect.

“They shouldn't have to wait until the enactment date,” Hochul said.

Lt. Gov. Brian Benjamin sponsored the legislation, which allows people on parole to receive “earned time credits” to encourage positive behavior and grants them the right to counsel at parole revocation hearings.

“When you get to understand the complications ... around how technical parole violations can lead to more incarceration then the original crime in some cases, you say to yourself: ‘Was this done particularly to harm poor Black and brown communities, or was this done to keep us safe?’” Benjamin, a Harlem Democrat, said.

Currently, people suspecting of violating parole can be immediately jailed for up to 105 days while awaiting hearings.

The new law speeds up the hearing timeline. Courts must use “least restrictive” means to ensure people appear, though they could detain people with proven “substantial risk” of refusing to show up.

Courts could direct people who violate most technical rules to receive reentry services from nonprofit community groups, rather than jail. The law caps how long people can be imprisoned again for other violations.

Parole rules will no longer include fraternizing with others with a criminal record, or “conduct related to cannabis” that is legal under state law.

Republicans, a minority in the Legislature, have accused Democrats of focusing more on perpetrators of crimes than victims.

Benjamin stressed the issue isn’t simply about “letting people out” of prison.

Marijuana was deeply embedded in Nepalese culture until the government outlawed it in the late 1970s.
Oct 12th, 2021
Follow Us
Most Recent