The new framework will help the two countries cooperate on a broad range of issues. 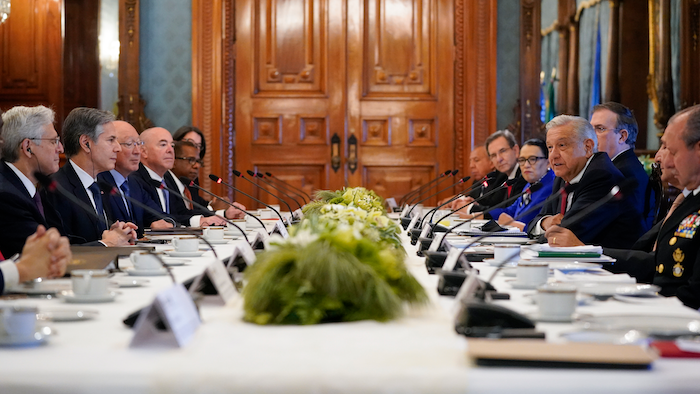 MEXICO CITY (AP) — High-level delegations from Mexico and the United States were at work Friday on building a new security framework for the bilateral relationship that they hope will govern how the two countries cooperate on a broad range of issues.

The so-called U.S.-Mexico Bicentennial Framework for Security, Public Health and Safe Communities seeks to move beyond the 13-year-old Merida Initiative that focused on building Mexico’s crime-fighting capabilities and rule of law projects.

“It’s time for a comprehensive approach to our security cooperation, one that will see us as equal partners in defining our shared priorities, tackle the root drivers of these challenges like inequity, like corruption and focus not only on strengthening law enforcement, but also public health, the rule of law, inclusive economic opportunities,” U.S. Secretary of State Antony Blinken said Friday.

The U.S. pledged to devote more resources to identify and treat people affected by opioids and Mexico committed to working with the United Nations to launch a program to better manage shipping containers to limit the importation of chemical precursors for synthetic drugs like fentanyl.

The governments committed to targeting importers of chemical precursors for fentanyl and methamphetamine, their financial networks and secret labs.

They also said they would work together to reduce the trafficking of guns, a high priority for violence-wracked Mexico, and to provide more opportunities to youth to make it harder for criminal organizations to recruit them.

“We need to deal with the violence, dismantle the transnational criminal organizations and focus on prevention with the goal of creating the conditions for a culture of peace, while we work hand-in-hand to address the fundamental causes of crime,” the joint statement said.

Mexico's Public Safety Secretary, Rose Icela Rodríguez Velázquez said, “for many years, the issue of Mexico's security has been addressed from the point of view that it's only measured by the use of force, now we are combatting the causes that originate that violence with social programs, intelligence and coordination, listening to men and women in their towns, their municipalities and communities.”

Immigration is expected to be a key topic of the dialogue. López Obrador has been saying for months that Mexico cannot continue to simply detain migrants and try to contain them in the southern part of the country, far from the U.S. border.

He has asked the U.S. government to invest in two of his signature social programs to relieve some of the economic pressure people feel to migrate. The Biden administration needs Mexico’s continued cooperation to manage the flow of migrants to the U.S. border.

The U.S. also must find a way to re-instate the controversial Trump-era policy that made asylum seekers wait out their cases in Mexico. Under the so-called Migrant Protection Protocols, tens of thousands of asylum seekers waited in dangerous Mexican border cities for their cases to advance. Biden had made cancelling the policy one of his first orders of business upon taking office, but the Supreme Court ordered that it be implemented again.

Mexico has also been pressing for the U.S. government to do more to stop illegal guns from pouring in from the U.S. The guns fuel Mexico’s organized crime violence, creating a public safety issue that López Obrador’s government has been unable to adequately address.

Both sides are also expected to discuss the role of U.S. agents in Mexico and intelligence sharing. The governments insist that their security agencies work closely on a daily basis. But following the United States’ arrest of former Mexican Defense Secretary Salvador Cienfuegos, then his release after Mexico’s loud protests, tensions have remained.

Cienfuegos was arrested after he was secretly indicted by a federal grand jury in New York in 2019. He was accused of conspiring with the H-2 cartel to smuggle thousands of kilos of cocaine, heroin, methamphetamine and marijuana while he was defense secretary from 2012 to 2018.

With Cienfuegos back, Mexico said it would perform its own investigation, but it was quickly closed. López Obrador attacked U.S. prosecutors’ case against the general and accused the Drug Enforcement Administration of fabricating the case.

Mexico restricted U.S. agents working in the country and lifted their diplomatic immunity.

At a breakfast with both delegations Friday, President Andrés Manuel López Obrador said “it would be very unfortunate if we didn’t understand each other, if our cooperation, the friendship between our governments and our peoples wasn’t strengthened.”