She said the measure would allow states to pass laws and regulations without fear of federal reprisal. 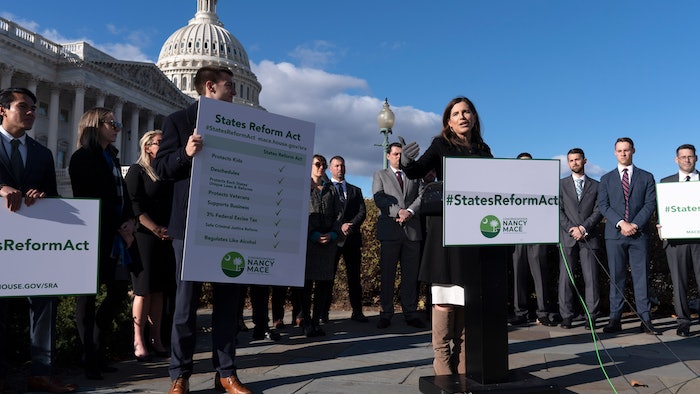 COLUMBIA, S.C. (AP) — Republican Rep. Nancy Mace of South Carolina introduced legislation Monday to federally decriminalize marijuana, a measure she said would give states freer rein to pass their own laws and regulations without fear of federal reprisals.

The measure, which Mace said she hoped would garner broad GOP support, was met immediately with criticism from conservatives in her home state, some of whom vowed opposition to any effort toward legalization.

In announcing the bill during a Washington news conference on Monday, Mace said a half-dozen GOP House members would be original co-sponsors of the bill, which she said would aim to regulate marijuana similarly to alcohol and prohibit its use for anyone under 21 years of age.

The measure would decriminalize marijuana at the federal level, an impediment cited in many states that have opted not to pursue legalization on their own. But it would not change local-level restrictions, meaning that states would still determine their own marijuana statutes.

“It protects each state’s unique laws and reforms,” Mace said. “It takes into account at the federal level that every state is different.”

American support for marijuana legalization has grown, underscoring a national shift as more states have embraced cannabis for medical or recreational use. According to a Gallup survey conducted earlier this year, more than two in three Americans supported legalizing marijuana, maintaining a record-high reached a year earlier.

According to the National Conference of State Legislatures, 36 states and four territories allow medical cannabis use, while 18 states, two territories and the District of Columbia allow non-medical, adult use.

But in South Carolina, where lawmakers have only passed one marijuana-related bill, allowing prescriptions for products with CBD — a hemp component that alone does not cause a “high" — Mace swiftly drew criticism from some conservatives over her proposal.

Calling marijuana “the number one gateway drug to the exploding opioid crisis that is ravaging our state,” Dave Wilson, president of Palmetto Family, a conservative Christian lobbying organization, warned in a statement that efforts to decriminalize marijuana “will make this crisis exponentially worse.”

Winning back Mace's 1st District was among South Carolina Republicans’ top priorities in 2020, with GOP Chairman Drew McKissick appearing alongside Mace the day after she defeated U.S. Rep. Joe Cunningham.

But on Monday, McKissick swiftly released a statement rebuking Mace’s bill, not referencing her by name but saying the state GOP opposed “any effort to legalize, decriminalize the use of controlled substances, and that includes this bill.”

In his own campaign for South Carolina governor, Cunningham has already introduced a marijuana legalization proposal of his own.

Mace's proposal did garner support from some groups, like South Carolina's arm of Americans for Prosperity, a political advocacy group funded by the Koch brothers, which lauded the effort as a “step in the right direction” for the leeway it would give states “to determine the best policies for cannabis governance in their states.”

The measure would tackle regulation of marijuana in three silos, giving the U.S. Department of Agriculture purview over growers, while the U.S. Bureau of Alcohol, Tobacco, Firearms and Explosives would oversee the cannabis industry. Medical marijuana would be regulated by the Food and Drug Administration, Mace said, adding that she would propose the drug be regulated similarly to alcohol.

It would also levy a 3% federal excise tax on all cannabis products, proceeds from which would go to small businesses, retraining law enforcement and mental health services, among other services. The measure would also expunge nonviolent, cannabis-only related offenses.