A handheld spectrometer can quickly determine the level of THC in cannabis plants. 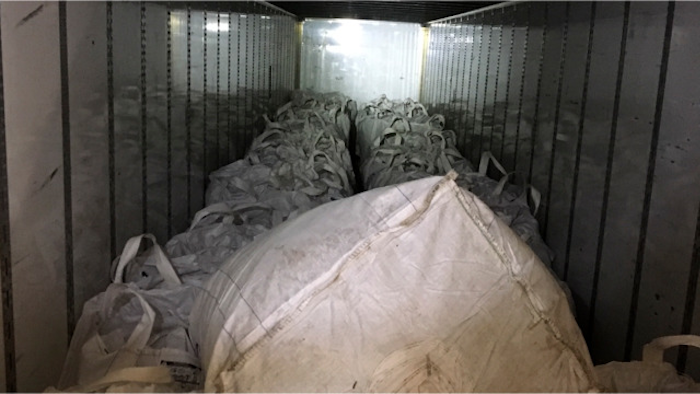 This undated photo shows a seizure of 6,701 pounds cannabis that the owner says is industrial hemp but that Idaho authorities said was marijuana.
Idaho State Police via AP

Hemp is technically legal in Texas, but proving that hemp is not marijuana can be a hurdle, requiring testing in a licensed laboratory. So, when a truck carrying thousands of pounds of hemp was recently detained by law enforcement near Amarillo, the driver spent weeks in jail awaiting confirmation that the cargo was legal.

Stories like that one inspired a team of Texas A&M AgriLife researchers to create a "hemp scanner" that could easily fit in a police cruiser and distinguish hemp and marijuana instantly, without damaging any of the product. The study was published in January in the scientific journal RSC Advances.

In 2019, Texas lawmakers made a distinction between hemp and marijuana based on the level of THC, or tetrahydrocannabinol, in a plant. THC is the major psychoactive agent in marijuana. If a plant has less than 0.3% THC, it is designated hemp.

Both federal and state restrictions on hemp have loosened in recent years. As a result, the value of hemp has skyrocketed, said Dmitry Kurouski, Ph.D., assistant professor of biochemistry and biophysics at the Texas A&M University College of Agriculture and Life Sciences, who led the study. Hemp is rich in compounds that are prized for their medicinal properties and flavor. The most well-known is CBD, or cannabidiol, which is thought to help with pain, anxiety and depression.

But farmers wanting to grow valuable hemp plants need a way to know that the plants contain little to no THC. When hemp can be legally grown in Texas later this year, producers will want to know if their plants' THC levels are approaching 0.3%, which would classify the plants as marijuana and therefore illegal to have and grow. An easy test for THC would be a boon for farmers as well as for law enforcement.

Could an existing scanner work?

Kurouski said that the catalyst for creating the hemp scanner was his colleague David Baltensperger, Ph.D., professor of soil and crop sciences at the Texas A&M University College of Agriculture and Life Sciences. Baltensperger had worked with both farmers and police officers and knew about the demand for a better test for THC, Kurouski said.

Kurouski's lab was experienced in using a technique called Raman spectroscopy to create quick and noninvasive tests for plant diseases and foods' nutritional content. The technique uses harmless laser light to illuminate structures within materials. Each material's scan is unique, akin to a fingerprint.

Kurouski had a hunch that Raman could be used to create a quick and accurate test for THC. A portable Raman scanner had been created for previous studies by lab members Lee Sanchez, a research assistant, and Charles Farber, a graduate student.

What was then needed was a way to scan many marijuana and hemp plants in order to search for patterns in how their Raman spectra differed.

Testing dozens of samples of marijuana and hemp fell to Sanchez. The testing needed to happen near Denver, where recreational marijuana is legal.

"Lee Sanchez was the hero who was traveling to Colorado three times, staying there in hotels and driving from one location to another. Most of those locations are old fire stations. They are not fancy greenhouses but old, shaky buildings with plants inside," Kurouski said.

Back in Texas, Sanchez and Kurouski analyzed the collected spectra. A statistical analysis method found seven regions in the spectra that differed slightly among marijuana and hemp varieties, a high-tech version of the "spot the difference" brain teaser. Taken together, the readout in these seven regions distinguishes hemp and marijuana with 100% accuracy.

"We know plants from A to Z in terms of their spectroscopic signature," Kurouski said. "But when we saw such a crystal-clear picture of THC that appeared in one second of spectral acquisition, that was mind-blowing."

Now that Kurouski's team has demonstrated its quick, noninvasive test for THC, they are looking to collaborate with industry to mass-produce their hemp scanner. Mass production could feasibly begin in two or three years, Kurouski said.

The team also aims to create a similar test for CBD. Farmers looking to grow hemp may want to know the amount of CBD in their plants to better estimate their value.

The study also uncovered the scanner's ability to distinguish among different varieties of hemp and marijuana. In the changing legal landscape, there are thousands of varieties of cannabis, many of questionable quality.

"Our colleagues, the farmers, were positively surprised that we could identify the variety with 98% accuracy," Kurouski said. "That blew them away."