Speakers at a public hearing on draft regulations said the state should prevent corporate marijuana interests from overrunning its small cannabis industry. 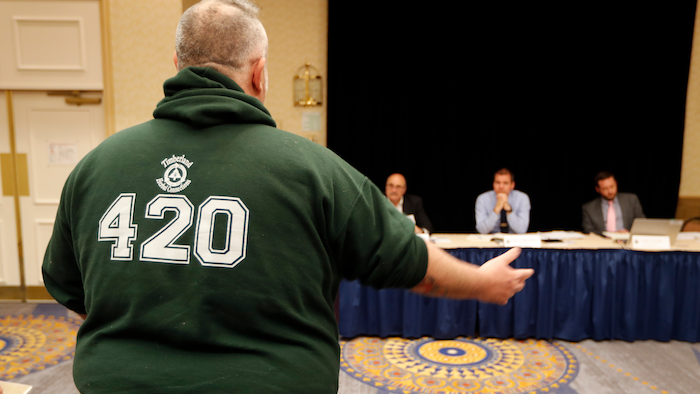 Marijuana enthusiasts in Maine used a public hearing Thursday to implore the state to protect the small businesses and growers they think should make up the backbone of its budding cannabis industry.

The Maine Office of Marijuana Policy held the public hearing about the state's draft marijuana rules, which are nearing approval after years of delay. State officials have said marijuana could be available in stores in early 2020, or possibly even sooner, but the state needs to pass a legal framework first.

The state needs to use the rules to prevent corporate marijuana interests from overrunning its small cannabis industry, which is long established as a result of legal medical marijuana in the state, said Charles Hawkins, who owns a North Windham dispensary.

Voters in Maine approved legal recreational use of marijuana in a 2016 vote. The draft rules must still be approved by the Maine Legislature before they can implemented. The rules cover issues such as licensure, retailing and taxation.

The state is still taking public comment on the proposed rules until June 2, said Erik Gundersen, the director of the marijuana office. The state could then provisionally accept the rules and the legislative process could begin.

Maine's proposed laws are tailored to prioritize state residents, Gundersen said after the hearing. The proposal would limit licenses to state residents at first.

"A lot of people want to focus on the small guy," he said. "We've done a good job of making sure that Mainers, and the small guy, get the first shot at the industry."

Speakers at the hearing also called on the state to approve a tax structure that isn't punitive for retailers and users. The price point of legal marijuana has to be competitive to deter people from the black market, speakers said.