Patients Rally for Legal Medical Use in Ecuador

Ecuador could be the latest in a tide of Latin American countries to approve some form of medicinal cannabis use. 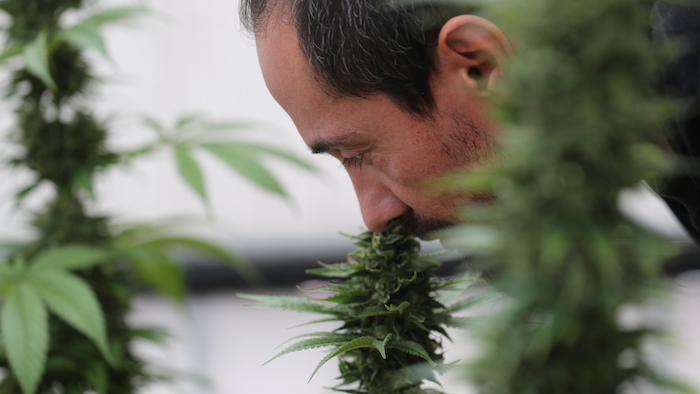 In this Wednesday Nov. 6, 2019 photo, Esteban Almeida smells his cannabis plants at his small greenhouse in Quito, Ecuador, Thursday, Nov. 7, 2019. Ecuador's legislature approved medical use of cannabis containing less than 1% of THC, the high-producing ingredient in marijuana, in September.
AP Photo/Dolores Ochoa

QUITO, Ecuador (AP) — Unrelenting pain in her hips and weeks of insomnia left Nelly Valbuena desperate for relief from her metastatic breast cancer.

The university professor found freedom from her disease’s cruel side effects in an unexpected remedy: CBD, a compound extracted from the cannabis plant.

Now Valbuena is pushing Ecuador’s government to put into effect recently passed legislation permitting medicinal use of cannabis products so others like her suffering from agonizing illnesses can have new options for pain relief.

“I desperately needed something to help,” she said. “Only someone living in pain and unable to sleep could know what that means.”

Ecuador’s legislature approved medical use of cannabis containing less than 1% of THC, the high-producing ingredient in marijuana, in September. President Lenín Moreno was given a month to veto but did not. Now Ecuadorians are waiting for the new norm to be published in the official register.

When the law is officially put on the books, Ecuador will be the latest in a tide of Latin American countries approving some form of medicinal cannabis use. Argentina, Colombia, Mexico, Paraguay, Peru and Uruguay have all signed off on permitting therapeutic usage, giving rise to a new industry now growing at a rapid rate and with expanding opportunities.

“In Latin America, with a population of 625 million people, there is great potential,” said Álvaro Torres, a Colombian businessman who co-founded Khiron Life Sciences Corp., which produces and distributes medical cannabis.

Valbuena’s fight against cancer began in 2012 and within four years it had spread to other organs, making her daily life a battle with pain.

Morphine patches provided temporary relief but were soon no longer covered by insurance and purchasing them was prohibitively expensive. The patches also had uncomfortable side effects, like vomiting, nausea and headaches.

Valbuena read about cannabis and put a plea on Facebook for help. Within a day, a doctor responded, offering her an oral CBD spray.

Valbuena isn’t the only one benefiting from medical cannabis in her household. So does Tahis Ponce, her husband’s 18-year-old daughter, who has severe cerebral palsy. The couple says CBD helps calm her laughing fits, anxiety and insomnia.

Valbuena and her husband have embarked on a media campaign to chip away at cannabis' stigma in the socially conservative country.

CBD is often derived from hemp plants, which look a lot like another type of cannabis, marijuana, but contain only trace amounts of THC. The U.S. government removed industrial hemp from its list of illegal drugs last year.

Though CBD has boomed in popularity, there is very little evidence to back up the health claims the industry touts. Proponents say it treats pain, reduces anxiety and helps with insomnia. But relatively little research has been done on humans to confirm those assertions.

Independent legislator Lourdes Cuesta recalled that before proposing the legislation, lawmakers called in patients and relatives to explain how traditional medicine left them without any quality of life, “but therapeutic cannabis returned it to them.”

Government institutions have not yet commented on how importation and production of medical cannabis will be regulated under the new norms.

Omar Vacas, a scientist at Ecuador’s Catholic University who has studied therapeutic cannabis, said that in the small South American nation it is already possible to find 30 different brands of national and imported medicinal cannabis on the black market.

Once such products are sold legally in pharmacies, there could potentially be a million consumers, he said.

“It could also help in the generation of jobs,” he said.

Alexis Ponce, Valbuena’s husband, said his family takes comfort in knowing that their own battles will one day help others.

“The relatives of someone with cancer or pain suffer just as much as the patient,” he said.

Lawsuit claims that companies are falsely using his name and image to push products he would never agree to endorse.
Jul 23rd, 2020

But the studies lack information on whether motorists were stoned when they crashed.
Jun 23rd, 2020
Follow Us
Most Recent