Authorities are still assessing the environmental impact and cleanup costs of an illicit marijuana operation found deep in the California wilderness. 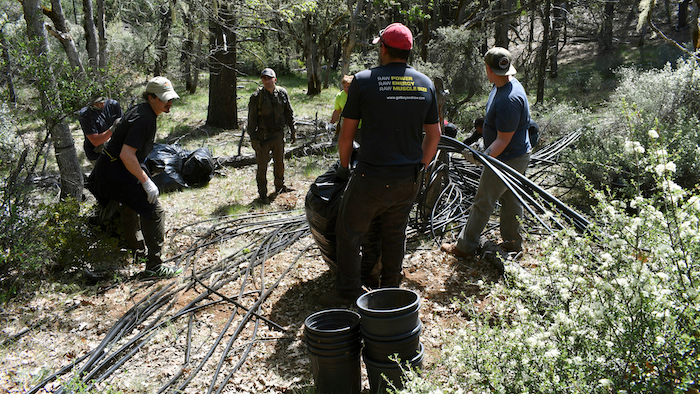 In this May 7, 2019, photo, Forest Service rangers, scientists and conservationists work to reclaim a trespass grow site where nearly 9,000 cannabis plants were illegally cultivated.
Jackee Riccio/CROP via AP

LOS ANGELES (AP) — Two months after two men were arrested at an illicit marijuana farm on public land deep in the Northern California wilderness, authorities are assessing the environmental impact and cleanup costs at the site where trees were clear-cut, waterways were diverted, and the ground was littered with open containers of fertilizer and rodenticide.

A group including U.S. Forest Service rangers, local law enforcement, scientists and conservationists hiked into the so-called trespass grow where nearly 9,000 cannabis plants were illegally cultivated on national forest land in the region known as the Emerald Triangle, for the marijuana that has been produced there for decades.

Authorities allege members of an international drug trafficking ring set up camp at the site as far back as 2015.

When deputies raided the remote clearing in the woods Sept. 9, they found hundreds of pounds of harvested marijuana, thousands of pounds of trash and more than 3 miles (4.8 kilometers) of plastic irrigation piping, according to the Trinity County Sheriff’s Office. They also discovered bottles of carbofuran, a banned neurotoxicant used to kill rodents that also has been linked to the deaths of spotted owls, fish and mountain lions. A quarter-teaspoon can kill a 300-pound (136-kilogram) bear.

The case highlights some of the growing pains California has faced since kicking off broad legal sales in 2018. Its legal marijuana market has grown to more than $3 billion but remains dwarfed by a thriving illegal market, which rakes in nearly $9 billion annually. Limited resources mean officials can’t keep up with all the illegal sites that are remnants of the outlaw era, when much of the pot for the U.S. black market came from the Emerald Triangle.

Experts say illegal sites like the one found in the Shasta Trinity National Forest, about 100 miles (160 kilometers) from the Oregon line, siphon valuable water, pollute legal downstream grows and funnel potentially tainted cannabis onto the streets.

“These places are toxic garbage dumps. Food containers attract wildlife, and the chemicals kill the animals long after the sites are abandoned,” said Rich McIntyre, director of the Cannabis Removal on Public Lands (CROP) Project, which is dedicated to restoring criminal grow sites on state and federal property in California. “We think there’s a public health time bomb ticking.”

CROP is a coalition of conservation organizations, tribes, elected officials, law enforcement agencies and federal land managers. Also lending its support is the legal cannabis industry, which says it’s being undercut by the criminal market. Officials estimate that up to 70% of California’s illicit pot comes from trespass grows mostly on public land.

Black market marijuana is potentially dangerous because traces of the toxic chemicals used at grow sites are often found in the plants, she said.

“If you have an illicit grow upstream from you, and you’re legal, that could end up tainting your product and prevent it from entering the market,” Robinson said.

CROP estimates that 9 billion gallons (34 billion liters) of water are diverted to trespass grows in California each year — a yearly supply for a city of 35,000 homes.

“In a state like California where water battles and drought are a way of life, that number is shocking,” McIntyre said. More than 60% of California’s water comes from national forest land.

Authorities in 2018 made dozens of arrests at trespass grows while seizing hundreds of thousands of pot plants along with cash and guns. Criminal growers often use powerful firearms to protect their operation, McIntyre said.

“There are stories of people — hunters, fishermen, hikers — who find themselves down the barrel of an AK-47” after stumbling on illegal grow sites, he said.

The toxic chemicals were cleared from the Shasta site Oct. 16, and a “decommissioning” cleanup — removing everything brought in by growers — should happen within a year. The goal is to restore illegal grows to pristine condition complete with reseeding and replanting, but that plan lacks funding.

CROP is lobbying for federal and state money to clean and reclaim an estimated 2,000 sites, a process it says could take seven to 10 years.

The group has a supporter in Democratic U.S. Congressman Jared Huffman, whose Northern California district includes huge swaths of state and federal property.

“We’ve seen firsthand how illegal grow operations threaten visitors to our public lands, steal water and contaminate streams, and kill wildlife on a landscape scale,” Huffman said in a statement. He’s introduced legislation that would identify the problem of trespass grows, expand land protections and free up funds to address it.

That was a jump from chemicals found at about 75% of illegal growing operations discovered on public land in 2017, and it was six times as high as in 2012.

These are automated indoor micro-farms (or shipping containers).
Apr 2nd, 2020

A coordinated scientific effort is needed to unlock the full potential of cannabis for agriculture and human health.
Mar 25th, 2020

Shein Latt was one of three people arrested last spring when police raided a farm in central Myanmar.
Mar 11th, 2020

Wireless flow sensors, which remove expensive digging and trenching costs, are poised to be a disruptor in the marketplace.
Mar 6th, 2020

The African nation is looking for an alternative crop to tobacco.
Feb 28th, 2020

A handheld spectrometer can quickly determine the level of THC in cannabis plants.
Feb 11th, 2020