The celebratory mood was dampened by confusion about operating hours and fears the dispensary wouldn't be able to serve all the patients by closing time. 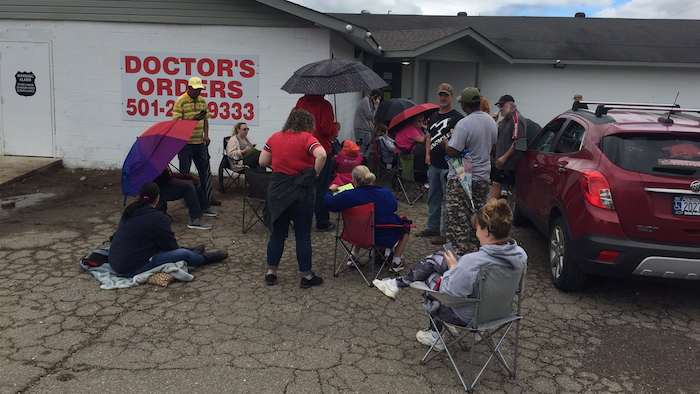 Doctor's Orders RX in Hot Springs was the first dispensary to be officially licensed by the state and is currently the only one operating. It sold marijuana to a patient Friday to test its software and officially opened Saturday.
Jamie Weiss, @JamieWeissTV

HOT SPRINGS, Ark. (AP) — Two and a half years after Arkansans voted to legalize medical marijuana, qualifying patients could begin buying the product Saturday morning when the state's first dispensary opened, though the celebratory mood was dampened by confusion about operating hours and fears the dispensary wouldn't be able to serve all the patients by closing time.

Doctor's Orders RX in Hot Springs was the first dispensary to be officially licensed by the state and is currently the only one operating. It sold marijuana to a patient Friday to test its software and officially opened Saturday.

Another Hot Springs dispensary, Green Springs Medical, was approved Friday and plans to open Monday morning. Department of Finance and Administration spokesman Scott Hardin said no other dispensaries are scheduled for inspection and approval, but he expects that to change over the next week.

Voters approved a measure legalizing medical marijuana for certain conditions in 2016. The product currently available is from one of the state's five licensed cultivators, the only one has harvested the plant. Two other cultivators have begun growing and expect to harvest by summer.

Dr. Rhonda Henry-Tillman, who chairs the Medical Marijuana Commission, said in a statement Friday that the commission was "pleased" dispensaries were opening and is "glad that patients will be able to access the appropriate cannabis product and possible relief they have patiently been awaiting."

By 8 a.m., when patients expected Doctor's Orders RX to open, around 100 people stood in a line that wrapped around the building and into an adjacent field. Despite the early hour and the rain, dozens turned out, from places like Jacksonville, Heber Springs, Saline County and northwest Arkansas. They brought folding chairs, umbrellas and ponchos, and used crossword puzzles, books and cellphones to pass the time. Some had been waiting since pre-dawn and had forgone restrooms.

But as 8 a.m. came and went, dispensary employees explained to the crowd that last-minute reports were wrong and the dispensary wouldn't be opening until 10 a.m. They said they were getting ready as quickly as possible, and they distributed marijuana "menus" that listed potency, price, and descriptions, such as "earthy pine flavor" and "fruity zesty aroma," for each of the five available strains. Each cost $105 for 7 grams.

The mostly mellow crowd became frustrated after another employee explained that the state-required electronic system that tracks patients' purchases would take time to set up for each buyer. He told those waiting that he would be "thrilled" to process six patients an hour, though the line had grown to about 150 people.

As of Thursday, the Arkansas Health Department had approved medical marijuana cards for more than 11,700 residents.

Doctor's Orders RX owner Don Sears said in a statement Friday that "processing schedules are unpredictable and out of our control," and warned patients to expect long lines and limited product.

Eventually, employees allowed in, one at a time, patients who had been at the dispensary Friday and had been registered in the system. Those who'd camped out since before sunrise expressed frustration.

At about 9:20 a.m., people cheered as an employee let in Gerard Wimer, a 38-year-old construction worker from Jacksonville who takes hydrocodone for back pain and arthritis and who was first in line. After he saw on the Friday night news the dispensary was opening, he drove down with a tent to camp out, though he ended up sleeping in his truck. Behind him stood his retired mother, 67-year-old Gena Hunter, whose spot he saved.

After around 10 minutes, Wimer left the facility carrying a paper bag that contained half an ounce of medical marijuana, which cost $220, he said.

Hunter, who followed her son out, said the employees were courteous and helped her choose strains good for her neuropathy and arthritis. She got a quarter ounce each of "Blue Dream" and "Cookies and Chem."

"I have no idea what that means," she said.

Wimer said his experience was "pretty easy," but that he would try Green Springs Medical next time, when he hopes prices come down. Still, he was glad he came.