Oregon's House passed a bill to enable agreements with other states if the U.S. government ever permits interstate transfers of marijuana. 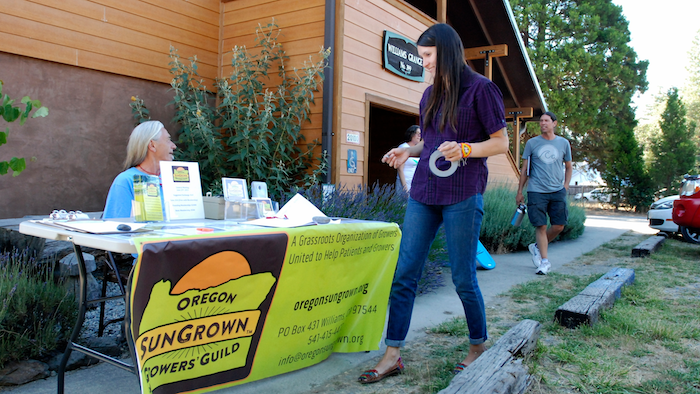 In this June 25, 2015, file photo, Gina Erdmann, director of the Oregon SunGrown Growers' Guild, sets up a sign-in table for the monthly meeting of marijuana growers in the old Williams Grange in Williams, Ore.
AP Photo/Jeff Barnard, File

With an eye toward making Oregon as big in pot as it is in craft brews and pinot noir, the state House passed a bill Tuesday that would empower the governor to enter agreements with other states for the transfer of marijuana.

The 43-16 vote came after the leader of minority Republicans urged passage of the Democrat-sponsored bill, noting the measure would set up Oregon to provide pot if the U.S. government ever permits interstate sales.

"The federal stance toward states with legal cannabis could change quickly, through congressional action or something as simple as a memo from the Department of Justice," said Republican Rep. Carl Wilson, who represents Grants Pass in a prime marijuana-growing area.

Illinois is set to become the 11th state to allow recreational marijuana use after lawmakers there passed a bill on May 31 that the governor has backed. A total of 33 states have legalized medical marijuana.

The Oregon Senate previously passed the interstate sales bill. It now goes to Gov. Kate Brown for consideration. The Democrat has been a vocal supporter of Oregon's marijuana industry.

With its mild, moist climate and rich soil, Oregon has a long history of pot growing, but a limited market. Of its population of 4 million, around 20 percent are regular marijuana users, according to the Oregon Health Authority.

Supply is running twice as high as demand, meaning the surplus from last year's harvest alone could amount to roughly 2.3 million pounds of pot.

"This is a major statement by the Oregon Legislature, that says we understand the future of this industry and Oregon's place in it," Smith said in an interview.

Rep. Rob Nosse, a Portland Democrat, urged passage of the bill as he stood next to a pot plant perched on his desk.

"The trend is toward the normalization and the mainstreaming of cannabis across much of our country," Nosse told fellow lawmakers. He said Oregon's inability to legally export its pot to other states would be like Florida being unable to sell its oranges across state lines.

He said Oregon's craft beer and wine producers have shown they can compete in the big leagues, and cannabis can do the same.

Democratic Sen. Floyd Prozanski of Eugene, who sponsored the bill, said he was looking forward to a time when the federal government would legalize interstate sales or say it would tolerate the practice.

"We will kind of be like what bourbon is to Kentucky," he said.

The measure is part of a strategy to deal with Oregon's huge pot surplus and prevent diversion of unsold legal marijuana into the black market.

Another bill passed on May 30 gives the Oregon Liquor Control Commission more leeway to deny new pot-growing licenses, based on supply and demand.