The state’s top cannabis regulator said the marijuana market can expect more strain and turbulence for at least a couple of years. 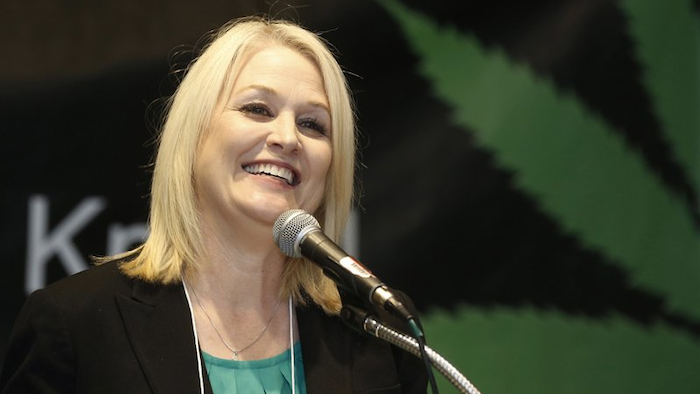 LONG BEACH, Calif. (AP) — California’s struggling marijuana market can expect more strain and turbulence for at least a couple of years as it deals with sustained competition from illegal sales, industry layoffs and fallout from a national vaping crisis, the state’s top cannabis regulator said Friday.

“It’s pretty tough just even for the regulators right now,” Lori Ajax, who heads the state’s Bureau of Cannabis Control, said at an industry forum. “These challenges just keep coming at us and to the industry.”

“We are going to continue to see that for the next couple of years,” she predicted.

Ajax’s remarks come at an unsettled time for California’s legal pot economy — at about $3 billion, the world’s largest.

The state’s thriving illegal marketplace, valued at about $9 billion, continues to dwarf the legal one. Cannabis remains unavailable in much of the state, where communities have either banned commercial activity or failed to establish local rules for sales and growing.

The industry has witnessed a round of layoffs at prominent companies that blame slower-than-expected growth, heavy taxation and other financial pressures. State tax collections have fallen far short of initial projections.

Meanwhile, the outbreak of a mysterious illness apparently linked to vaping has sickened more than 2,000 Americans and at least 40 people have died. Most of the cases have involved products that contain the marijuana compound THC, typically obtained from illegal sources. U.S. health officials have identified a likely culprit in at least some of the cases, vitamin E acetate, a vaping oil thickener that is popular in the illicit market.

Ajax pointed to gains, including tougher enforcement against rogue operators and the end of temporary licenses that were issued when broad legal sales kicked in on Jan. 1, 2018, when the state was struggling to get its permanent licensing system in place.

But she acknowledged that the agency needs to become more responsive to licensed companies — the bureau is routinely deluged by thousands of emails — and streamline licensing to allow more legal business to open their doors. Ownership changes have posed challenges, too.

“We don’t want to confuse you but, I guess, we’re confused too,” she said at one point. “We’ve got to un-confuse things.”

Broad legalization in the state was expected to begin a period of prosperity for businesses that for years faced the threat of legal action from local or federal authorities. Instead, many businesses are struggling.

Industry groups have repeatedly urged the state to get tougher with illegal shops and growers, and they’ve urged lawmakers to cut hefty tax rates that they say are driving customers into the underground market where products can sell at half the price of legal shops.

Other speakers recited a litany of problems with the emerging pot economy, from the scarcity of licenses to the lack of banking services for many companies.

“There are so many things that need to change,” said Cody Bass, a board member of the National Cannabis Industry Association.