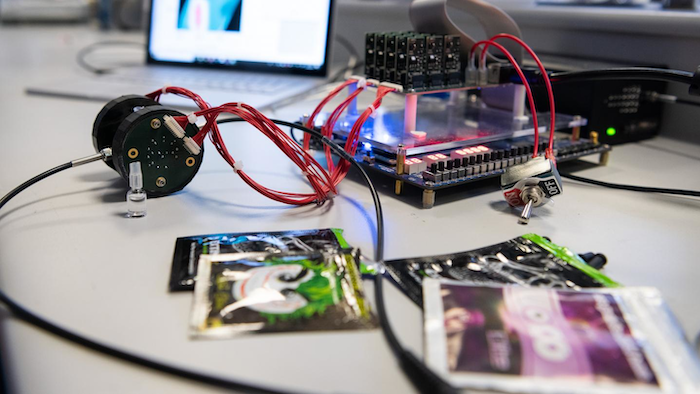 The prototype test takes only five minutes to search for spice in a saliva sample.
University of Bath

A simple saliva test to detect if someone has recently taken the street drug "spice" has been developed at the University of Bath - the first such test ever created.

The multi-disciplinary research team who developed the five-minute test hope it can be used by health professionals to better treat people suffering from adverse effects of the synthetic drug.

Despite the serious and increasing public health problem that spice poses in Britain and other countries around the world, there is currently no point-of-care test to tell if someone has recently taken it.

This is especially problematic for health professionals as many patients they believe have used spice are unconscious, incoherent or experiencing psychosis. Without being able to test for spice a precautionary approach is often followed which might not be the optimal course of treatment. In addition, people undergoing temporary psychosis due to spice might be unnecessarily admitted to a psychiatric ward, putting pressure on scarce NHS resources.

The saliva test developed at Bath takes about five minutes, can be done on the spot and will identify whether spice has recently been smoked, what group of the diverse variants available it came from and an indication of concentration.

Spice isn't a single substance but can be one or a mixture of more than 100 subtly different man-made chemicals. That makes testing for spice particularly difficult and why this approach is such a step forward.

The test prototype is reported in Analytical Chemistry.

Dr Chris Pudney from the University of Bath's Department of Biology & Biochemistry came up with the idea. He said: "My partner is a psychiatrist and she was telling me that currently they don't have a way to confirm when they suspect spice use, they just don't know for sure. You can test for it with a urine or blood sample that is sent off to a lab, but that takes a few days and so in most cases it's pointless.

"I started looking into the chemistry and it's actually similar to something we have developed for detection of biological molecules. We decided on saliva because it seemed tractable and less invasive than some other options."

Dr Pudney contacted colleagues from the Departments of Pharmacy & Pharmacology, and Computer Science to explore developing the test and whether it would be attractive to health professionals.

The University hosted a 'Patient Public Involvement' session with representatives from the NHS, drug charities and homeless charities who collectively expressed an interest.

Dr Jenny Scott, from the Department of Pharmacy & Pharmacology, said: "Spice can be used to 'zombify' people, escaping them from the reality in which they find themselves, making them highly vulnerable. Two thirds of prison governors report concern about new psychoactive substances use in their prisons, including spice. Use of spice and other synthetic cannabinoids is estimated at about 10% amongst prisoners, and has placed a strain on emergency healthcare. Our collaborative research work with homeless people who use drugs has found spice is commonly taken by them also.

"Detection and confirmation of spice use early on when someone is found incoherent gives a chance to start timely treatment for their symptoms. Further down the line, we can foresee the kit being used as part of a care pathway that avoids the need to hospitalise some patients if appropriate healthcare can be given where they are."

The research team now wants to further develop the prototype to optimise it for use in clinical settings. They hope to be able to trial it with medical professionals within a year.

Dr Pudney added: "We've proved the concept with a test that's simple and very accurate. The hardware is compact and portable and the results are easy to understand. We're working on software now, so that the user has a simple 'one click' way to use it."