As mayor, he allegedly solicited bribes from marijuana companies in exchange for letters of approval from the city. 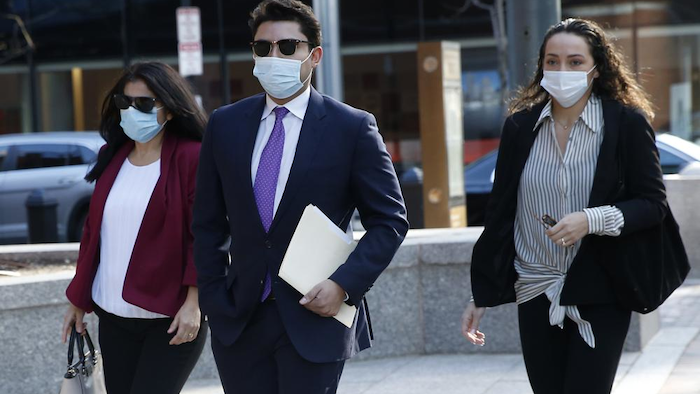 BOSTON (AP) — Adult entertainment. A personal trainer. A helicopter tour of historic mansions in Newport, Rhode Island. Those were some of the things a former young Massachusetts mayor bought with money from investors who believed they were supporting the creation of a smartphone app, a federal prosecutor told jurors Monday.

That was before 23-year-old Jasiel Correia won the race for Fall River mayor in 2015 and turned his administration into a “government of extortion and bribery,” Assistant U.S. Attorney Zach Hafer said.

The fraud and corruption case against Correia kicked off in Boston’s federal court with the prosecutor seeking to portray the now 29-year-old as a con artist who shrewdly stole from investors to bankroll his grand lifestyle and build his ambitious political career.

“This is a case about lying, cheating, stealing and shakedowns,” Hafer, chief of the U.S. attorney's office's criminal division, said in his opening statement.

Correia is charged with stealing about two-thirds of almost $400,000 he got from seven investors for his app called SnoOwl, which was designed to help businesses connect to consumers. Prosecutors say that as mayor, Correia also extorted hundreds of thousands of dollars from marijuana businesses seeking to operate in Fall River and forced his chief of staff to give him half of her salary in order to keep her city job.

It's the first high-profile trial to get underway in Boston's federal court since the beginning of the coronavirus pandemic. Only 26 people — including 14 jurors — are allowed in the courtroom, and plexiglass barriers have been installed around the judge's bench, the witness stand and between the lawyers' tables. Correia, wearing a dark suit and tie, walked into the courthouse with his mother and fiancé.

Correia has denied any wrongdoing and slammed the case as an effort to bring down his political career. His defense attorney told jurors Correia was working nonstop to make the app a success and never promised investors he wouldn't take a salary.

“There was no intent to defraud. There was no intent to steal. He above anybody wanted to see this business as a success," said Kevin Reddington, whose past high-profile clients include Catherine Greig. She was the longtime girlfriend of late Boston gangster James “Whitey” Bulger and went to prison for helping Bulger evade capture.

Prosecutors say before he became mayor, Correia duped investors by falsely telling them he previously sold another app for big profit and wouldn't take any compensation. One investor was so close to Correia that he considered him a “surrogate son,” and wrote check after check when Correia came back to him for more money, Hafer said.

Hafer listed a litany of things he says Correia spent investors' money on: a Mercedes sedan, jewelry, luxury hotels, meals at high-end restaurants and shopping at places like Burberry and Louis Vuitton. Correia also spent money on adult entertainment, Hafter said, but didn't provide further details. He made charitable donations in his own name, including $3,000 to the Fall River Children’s Aquarium, which later named a room after him, Hafer said. Some of the money did indeed go to software developers, he said.

As mayor, Correia is accused of soliciting bribes from marijuana companies in exchange for letters of approval from the city they need in order to get a license. Three of Correia’s associates, who have previously pleaded guilty in that extortion scheme, are among those who are expected to testify against him.

For months after his arrest, Correia resisted calls to leave office and survived a bizarre election in March 2019 during which he was recalled by voters and reelected the same night. But after federal agents arrested him a second time — this time for the extortion scheme — he agreed in October 2019 to take a leave of absence. He was ousted by voters the next month.

Reddington denied that Correia extorted his chief of staff into kicking back part of her salary to him, describing her as a mother figure to him. He also indicated he will try to portray the government witnesses, who have cooperation agreements, as liars who will say whatever prosecutors want in order to get a lighter prison sentence.

“The government ran out of paper giving out their immunity agreements and plea agreements here," Reddington said.