The discovery unlocks a whole new avenue of cannabis research. 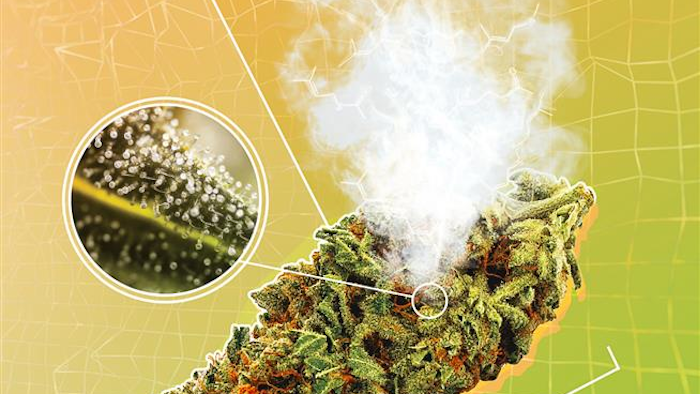 TUSTIN, Calif. — Abstrax, an industry leader in the study and production of cannabis and botanically-derived terpenes, has officially pinpointed the chemical origins of the “skunky, gasoline” scent and flavors responsible for specific cannabis cultivars and published their results in a peer-reviewed study in the American Chemical Society journal ACS Omega.

This is the first time in history this feat has been accomplished, providing the opportunity for researchers to investigate the properties of these new compounds.

For years, the cannabis science community has been befuddled by what compounds generated this scent. Although terpenes have traditionally been associated with the scent of cannabis, there is no combination of these compounds that can generate the unique and characteristic skunk-like aroma of cannabis. Now, a team led by T.J. Martin of Abstrax has uncovered an entirely new family of compounds responsible for this scent. Using 2-Dimensional gas chromatography (2DGC) coupled with mass spectrometry, flame ionization detection, and sulfur chemiluminescence, they discovered key volatile sulfur compounds (VSCs) – organic compounds containing sulfur – that directly correlate to the pungent aroma of cannabis. This new family of compounds includes thiols, sulfides, and even disulfides. Each were found to contribute to the characteristic skunk-like aroma, and when coupled with the other aroma compounds such as terpenes, combine to generate the unmistakable and potent scent of cannabis.

“The combination of multiple detectors, in tandem with 2DGC to analyze cannabis, gave us the tools needed to parse through data and identify trends between certain compounds and the aromas of various cannabis cultivars,” said Dr. Iain Oswald, the lead author of the study. “Our data conclusively establishes a link between this new family of VSCs in cannabis and its pungent aroma.”

Gas chromatography is typically used when analyzing the volatile species of various samples – whether flowers, food, or even beverages. However, cannabis presents a uniquely complex case due to the wide variety and number of aroma compounds present. Two-Dimensional gas chromatography alleviates this issue by allowing for greater separation of compounds in the data, allowing for easier identification of the chemical species. Furthermore, the use of sulfur chemiluminescence – a method of detecting only compounds with sulfur atoms within their structure – provides an easy way to identify these compounds in the data. This is especially helpful in situations where compounds are in exceedingly low concentrations, including those discovered in this study.

“Much like Cannflavins are prenylated flavonoids found specifically in cannabis, some of these newly discovered ‘cannasulfur compounds’ also appear to be highly specific prenylated VSCs to cannabis,” said Oswald. “It is interesting to see a common chemical theme within entirely different classes of compounds produced by this plant.”

The study results provide a starting point for further research to be conducted that will be multidisciplinary in nature. For instance, the realization that certain cultivars may produce these compounds, while others do not, provides an opportunity to determine if this is due to genetic differences or otherwise. For instance, Bacio Gelato, which is a cultivar first bred by co-author Mario Guzman and has the highest concentration of VSCs measured in cannabis, may have genetic differences from the cultivar Black Jack, which had no measurable VSCs.

“This study really opened my eyes,” said Guzman. “It confirmed everything I had thought about some cultivars I have bred — that they are some of the most pungent and medicinal on the market. These compounds are the reason Gelato and subsequent crosses are some of the most highly sought after out there.”

“I have suspected for years now that we were missing something in our understanding of this plant,” said Del Rosso. “Although terpenes have been hailed as the major source of the pungent scent of cannabis, we now know that it is this new class of VSCs.”

Del Rosso noted that perhaps the most exciting result from the study was the correlation between the chemical structure of VSCs found in garlic and cannabis. The prenyl functional group that is found in each VSC measured is chemically similar to the allyl group found in garlic with a few modifications. These VSCs in garlic offer some of its strongest health benefits and suggest that the VSCs in cannabis may likewise possess similar activity.

“I hope our results can act as a springboard to help other researchers determine if these compounds endow cannabis with even more medicinal properties than we ever imagined,” said Del Rosso.

Another result from the study was that these compounds can translate from the flower state to extracts such as butane hash oil (BHO), a popular cannabis concentrate found in vapes.

“We confirmed that cannabis extracts can indeed contain these compounds in reasonable concentration if processed correctly,” said Kevin Koby, CSO of Abstrax. “Their high volatility makes them prone to volatilization, so we weren’t sure how they would translate into cannabis extracts. We were pleasantly surprised to see high levels in the sample we measured, especially if these compounds possess beneficial medicinal properties.”

“These results prove that cannabis producers are racing against time when it comes to getting quality products into customers’ hands,” said Koby. “Hopefully our results will establish a new standard for cultivators and distributors to help preserve and protect these key compounds — regardless of the rigors of processing, packaging, and time on shelf. Most importantly, it will help brands maximize their products and literally push cannabis quality to the next level.”