Celtics Add Their Voices to Those Asking for Griner's Return

The WNBA star has been detained in Russia for more than 100 days. 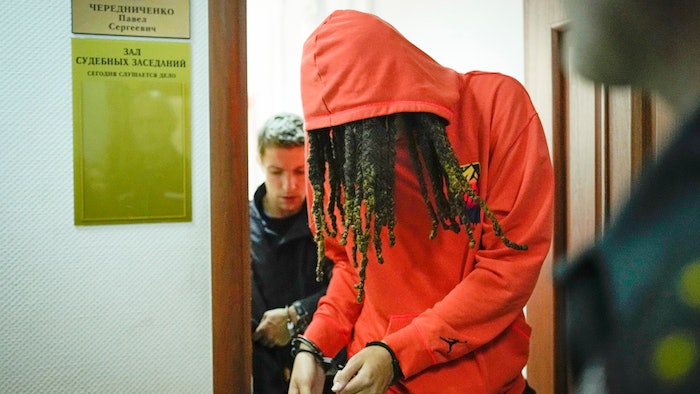 WNBA star and two-time Olympic gold medalist Brittney Griner leaves a courtroom after a hearing, in Khimki just outside Moscow, Russia, Friday, May 13, 2022. Griner, a two-time Olympic gold medalist, was detained at the Moscow airport in February after vape cartridges containing oil derived from cannabis were allegedly found in her luggage, which could carry a maximum penalty of 10 years in prison.
AP Photo/Alexander Zemlianichenko

The WNBA star has been detained in Russia for more than 100 days — wrongfully so, U.S. officials insist — and some members of the Boston Celtics are using their platform at the NBA’s title series to add their voices to the chorus of those demanding she be allowed to come home.

Several players wore black T-shirts with “We Are BG” on the front in orange letters for their practice session at the NBA Finals on Saturday. Game 2 of the title series between the Celtics and Golden State Warriors is Sunday.

“It’s extremely tough seeing what she’s going through,” All-NBA forward Jayson Tatum of the Celtics said. “I know everybody sees and feels that, and obviously we’re all together in support trying to bring her back to her family and things like that. Yeah, wearing those shirts today in support of her.”

The shirts also had a QR code on the back, linking to an online petition seeking 300,000 signatures in support of the notion of bringing Griner home.

“We felt like it was a good idea to use our availability and our platforms to bring attention to certain matters,” said Celtics guard Jaylen Brown, an officer within the National Basketball Players Association. “I always stand for that. Being an athlete, we’re not just up here just to entertain you guys. We also have a voice. I always appreciate and applaud athletes, entertainers, my teammates who plan to do something with that. I’m not sure if we’ll wear it for the rest of the time, but today was a good day to bring attention to a topic that was necessary.”

Griner, who plays for the Phoenix Mercury, has been detained since February after vape cartridges containing oil derived from cannabis were allegedly found in her luggage at an airport in Moscow.

Griner, a two-time Olympic gold medalist for the U.S., faces drug smuggling charges that carry a maximum penalty of 10 years in prison.

“It’s been now over 100 days since she’s been illegally held in Russia,” NBA Commissioner Adam Silver said. “I think it’s something that all of us should be heard on, contacting your representatives and others. I will only say we are working in lockstep with the U.S. government and outside experts on trying to expedite her release in any way we can. Certainly our hearts go out to her and her family, and we are just as eager for her safe return.”

Russian officials have described Griner’s case as a criminal offense without making any political associations. But Moscow’s war in Ukraine has brought U.S.-Russia relations to the lowest level since the Cold War.

Despite the strain, Russia and the United States carried out an unexpected prisoner exchange last month — trading former Marine Trevor Reed for Konstantin Yaroshenko, a Russian pilot serving a 20-year federal prison sentence for conspiring to smuggle cocaine into the United States.

While the U.S. does not typically embrace such exchanges, it made the deal in part because Yaroshenko had already served a long portion of his sentence. The Russians may consider Griner someone who could figure into another such exchange.

Celtics guard Grant Williams helped coordinate Saturday’s effort, working with the NBPA and the WNBA’s player association as well to make it happen.

He said it’s important NBA players show “that love and support” for Griner.

“They sent them overnight to get them here for today,” Williams said. “They did a phenomenal job, and want to credit them to make that process happen. We just wanted to do that as a team. It was one of those things where no one questioned it. Everyone said, ‘Let’s do it. Everyone put the shirt on immediately when we got them, fresh off the box. They were ironed and good to go.’”

The WNBA has acknowledged Griner's absence this season in a number of ways, including social media posts from many players and the league placing a decal with her initials and number on the home floor of all 12 of that league's teams.

“Don’t forget, y’all," Celtics guard Marcus Smart said as he pointed proudly to Griner's initials on his chest. “See this shirt. We are with BG."