The state's licensed growers have struggled to pay a $50-per-ounce cannabis tax as marijuana prices have tumbled. 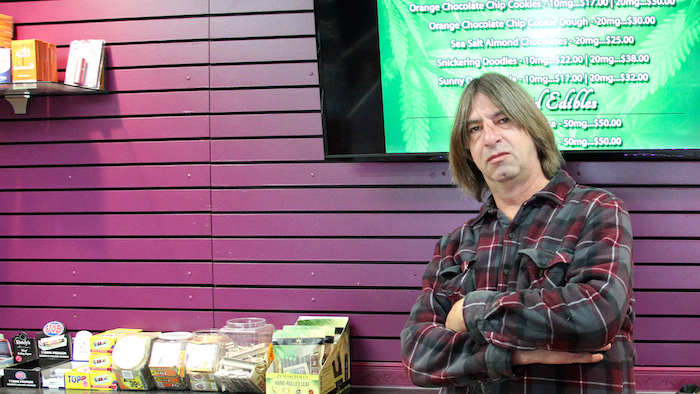 A greenhouse expansion is behind schedule, and he said the company could have hired more crews to work on it if taxes and other expenses weren't so high.

"We don't have enough of a cushion where we could comfortably have a crop failure, and that's not a very safe place for a cultivation company to be," said Abel, an owner of Greatland Ganja in the Kenai Peninsula community of Kasilof.

Abel is among a number of Alaska pot growers who have struggled to pay the state's $50-per-ounce cannabis tax as marijuana prices have tumbled. He said he's paid his taxes on time, but it hasn't always been easy.

Forty-five growers in the state are delinquent, compared to six a year ago, according to figures provided by Alaska's Department of Revenue. For the June tax filing period, more than 160 growers had filed a tax return with the state.

The cannabis tax is imposed on cultivators when pot is sold or transferred from a grow facility to a retail shop or product manufacturer. There is a lesser tax rate for immature bud and trimmings.

Among states that have legalized recreational cannabis, Alaska is the only one whose tax structure is built solely on a fixed dollar amount paid by growers, according to information compiled by the Pew Charitable Trusts, a public policy organization. Alaska has no statewide sales tax, though some municipalities, like Anchorage, levy their own sales tax on weed.

In Alaska, the total amount of late taxes due, with accruing penalties and interest, is about $1 million, according to the department.

"When you get into a hole, it's really hard to get out when the holes keep getting deeper underneath you," said Jana Weltzin, an attorney who represents Alaska cannabis interests.

When the industry first started, prices were around $4,000 a pound (0.45 kilogram), said Cary Carrigan, executive director of the Alaska Marijuana Industry Association, a trade group. They have settled around $2,300 a pound, he said.

While the price was expected to decline, "no one anticipated that the floor would drop that low, to the point where if you paid your taxes on time you would not have enough money to pay your employees or your electric bill or something else would suffer," he said. "That's why there are so many delinquencies and people that are working on tax payment programs."

The tax generated anticipated revenue of about $1.8 million for the state in June. Three-quarters of state pot revenue is intended to be used for recidivism programs and a marijuana education and treatment fund.

Kelly Mazzei, excise tax manager with the Revenue Department, in a letter to marijuana regulators earlier this year called the number of late accounts alarming. The tax debt doesn't go away if a business goes under, she told The Associated Press.

Many in the industry blame the tax, though some also see an unlimited number of licensees as part of the problem. Oregon officials cited that state's issue with unlimited licenses after a massive oversupply of marijuana led to a freefall in prices.

Weltzin said Alaska is not in that situation yet, but it's a concern.

"Hopefully, we can get a system figured out where we have a more fair tax structure and a more stringent licensing process, so it will give value to our existing businesses but still encourage new business growth," she said.

Alaska's $50-an-ounce (28 grams) tax was set by the 2014 voter initiative that legalized recreational marijuana for those 21 and older. While the initiative allowed the state to establish lower rates for certain parts of the plant, which officials have done, a rewrite of the tax is considered up to the Legislature.

"We're trying to figure out ... where the sweet spot is with that," he said, with fairness among growers, retailers and manufacturers a key consideration.

Dane Wyrick said the future of his Anchorage cultivation and retail business is hazy after feeling squeezed by state taxes and other expenses. He said the tax, combined with production expenses and other factors, is too burdensome.

Some industry officials and advocates hope for a sympathetic ear in Alaska's Republican governor, Mike Dunleavy, who has adopted an open-for-business mantra.

Dunleavy frustrated the industry earlier this year by appointing to a marijuana regulatory board a woman who was involved in a failed effort to ban cannabis operations in Fairbanks. After lawmakers rejected the appointment, Dunleavy picked a former board member who supported the legalization effort and who Carrigan considers a good choice.

Assistant Commerce Commissioner Amy Demboski has convened a work group with industry interests, regulators and the Revenue Department to discuss what they see as business impediments, with taxes among the issues raised, Glenn Hoskinson, a special assistant to Commerce Commissioner Julie Anderson, said by email.

"This process is still in its infancy, so it's too early to know if there is going to be any proposal or anything of substance from this working group," Hoskinson wrote.

Carrigan sees this as an effort to move forward with the administration: "When somebody holds out an olive branch and wants to move forward, you don't slap their hand."

These are automated indoor micro-farms (or shipping containers).
Apr 2nd, 2020

A coordinated scientific effort is needed to unlock the full potential of cannabis for agriculture and human health.
Mar 25th, 2020

Shein Latt was one of three people arrested last spring when police raided a farm in central Myanmar.
Mar 11th, 2020

Wireless flow sensors, which remove expensive digging and trenching costs, are poised to be a disruptor in the marketplace.
Mar 6th, 2020

The African nation is looking for an alternative crop to tobacco.
Feb 28th, 2020

A handheld spectrometer can quickly determine the level of THC in cannabis plants.
Feb 11th, 2020