Alaska Set to Allow Use at Marijuana Stores

Lt. Gov. Kevin Meyer signed and filed rules to make Alaska the first state to allow the use of recreational marijuana at authorized pot shops. 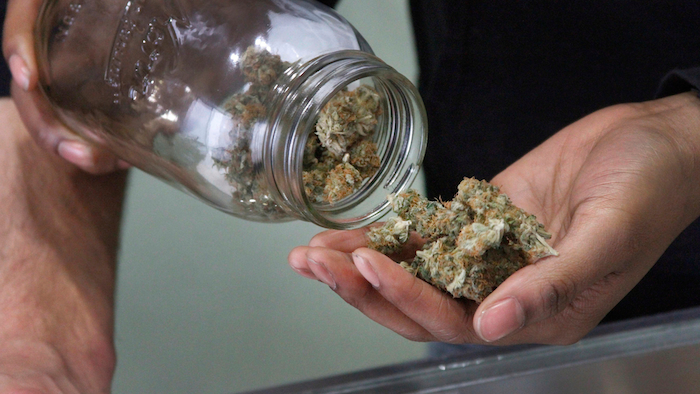 Alaska is poised to become the first state in the nation with statewide rules allowing people to use marijuana at certain stores where they buy it.

Lt. Gov. Kevin Meyer this week signed and filed rules for the use of recreational marijuana at authorized pot shops.

They allow marijuana use in special sections of stores that are separated from the retail area by walls and a secure door, or outdoors. Shops allowing for onsite use are to be freestanding, though an area seen as open for further discussion is whether shops that don't want to allow smoking must be freestanding.

Supporters of onsite marijuana use see it as a way to provide tourists with a place to partake. Summer is tourist season in Alaska, with cruise ship passengers stopping in communities such as Juneau.

But industry officials also know there will be a lot of attention paid to how onsite use takes shape in the state.

"Outside of being a test model for the rest of the U.S., we're also going to be trying to do it right for ourselves," Cary Carrigan, executive director of the Alaska Marijuana Industry Association, said recently. "There's a lot riding on this."

The regulations take effect April 11, but there will be a lag before people can smoke or consume marijuana edibles at stores.

Alaska's marijuana regulatory board must vet all applications, and its next meeting is in early May. That's not enough turn-around time for businesses to have their applications ready for review, said Erika McConnell, director of the Alcohol and Marijuana Control Office. The deadline for meeting materials is April 12.

Unless the Marijuana Control Board holds a special meeting, the earliest it could consider applications would be at its July meeting, she said by email.

"In theory, operations could begin shortly after that meeting, but it will depend on the circumstances of each individual application, of course," McConnell wrote.

Alaska legalized recreational marijuana in 2014 and for years went back and forth on its use at pot shops before the board approved rules in December. The rules underwent a standard legal review before being sent to Meyer late last month.

Interested retail businesses must devise plans meeting security, ventilation and other standards, and gain board approval. Local governments will be able to protest onsite consumption applications and by ordinance or a vote of the people can prohibit onsite use or aspects of it.

Erik Altieri, executive director of NORML, a national cannabis advocacy organization, said by email that while Alaska would be the first U.S. state to finalize statewide rules for onsite consumption, "we expect more states to follow suit in the not too distant future."