The law won't ban testing job applicants for cannabis chemicals, but it will prohibit many employers from using the results to turn someone away. 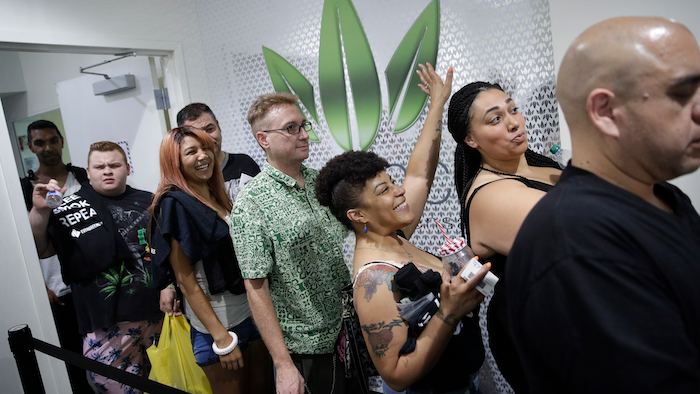 In this July 1, 2017, file photo, people wait in line at the Essence cannabis dispensary in Las Vegas. Nevada is set to pioneer a law to prevent job-seekers from being immediately rejected for work based on a positive marijuana test.
AP Photo/John Locher, File

LAS VEGAS (AP) — Two backers of a pioneering Nevada law to prevent employers from rejecting job-seekers based on a pre-employment marijuana test cast the effort Wednesday as an anti-discrimination measure in a state where recreational pot sales are booming and rules about legal marijuana consumption are evolving.

The law, which goes into effect in January, won't ban testing job applicants for cannabis chemicals, Democratic Assembly members Dina Neal and Edgar Flores said. But it will prohibit many employers from using the results to turn someone away.

"We needed to ensure we were providing safeguards for marijuana users who are following state law and are trying to get jobs." Flores said.

Neal said the law does not liberalize marijuana use in the workplace, where employers can and do prohibit drug or alcohol use.

It instead aims to address what Neal called "a moral and social dilemma" caused by the ability to detect trace amounts of marijuana in blood or urine weeks or even months after people ingest pot during off-work hours.

"I don't condone marijuana use," Neal said. "But I don't want unfairness and discrimination. We were saying marijuana dispensaries can sell to people, but then the people couldn't work. We had to do something."

The law, signed by Democratic Gov. Steve Sisolak a week ago, contains broad exceptions for employers who declare they're seeking people for safety positions such as firefighters, emergency medical technicians or federally licensed drivers.

"We want to make sure we have safety conscious individuals," said Paul Enos, chief executive of the Nevada Trucking Association and one of several business representatives who testified at the Legislature to shape and revise the law.

He said that in his industry, not just truckers but mechanics and dispatchers could be considered safety positions.

"The bill gives employers a tremendous amount of discretion to determine whether or not the position they are hiring for could impact the safety of others," Enos said. "They can still use positive test for marijuana to deny the job."

The law makes it unlawful for would-be employers in Nevada "to fail or refuse to hire" a prospective employee whose screening test results indicate the presence of marijuana.

Employees who test positive can contest the results and seek a re-test, at their expense.

Even with the exceptions, a National Organization to Reform Marijuana Laws official said the law puts Nevada ahead of other states in addressing marijuana and employment issues.

"Those who consume conventional prescription medications or alcohol legally and responsibly while off the job do not suffer sanctions from their employers unless their work performance is adversely impacted," Wolf said. "It's about time that employers treat those who consume cannabis legally while away from the workplace in a similar manner."

Neal worried that employers might exploit exemptions, and Flores said the law might need to be fine-tuned when the biennial state Legislature meets again in 2021.

"I'm hoping that it's not abused and they're not going to say a secretary is a safety position," Neal said.

Riana Durrett, executive director of the Nevada Dispensary Association, called the law a step toward normalization of marijuana use by adults.

"It makes sense for us to start adjusting our laws to reflect that this is legal and it should be treated like alcohol," she said.