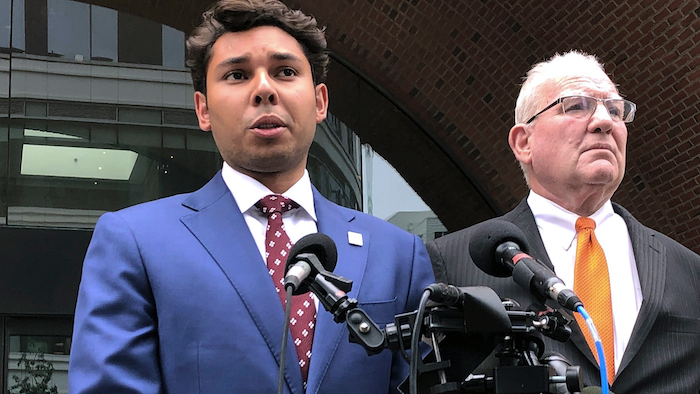 BOSTON (AP) — A young Massachusetts mayor's tortuous tenure took another strange turn Friday when he was arrested on charges that he conspired to extort hundreds of thousands of dollars from companies seeking to operate marijuana businesses.

Fall River Mayor Jasiel Correia, who became the old mill city's youngest mayor when he was elected in 2015 at age 23, brazenly accepted cash bribes in exchange for issuing official letters needed to obtain a license to set up a pot business, authorities alleged.

At least four business owners paid a total of $600,000 in bribes to the mayor, and he used the money to support a lavish lifestyle and cover mounting legal bills, they said.

"Without hesitation, Mayor Correia was extorting marijuana vendor after marijuana vendor," U.S. Attorney Andrew Lelling said at a news conference. "It's striking the lengths he went to get the money, and the seeming indifference with how overt his activities were."

In one instance, Lelling said, Correia walked into a vendor's office and simply asked for $250,000 to issue one of the letters. Another time, Correia was paid $75,000 in cash while sitting in the backseat of a car. He promptly handed over a signed letter, Lelling said.

Correia pleaded not guilty Friday to the charges, which include bribery, extortion, wire fraud and filing false tax returns. A judge ordered him to post $25,000 of a $250,000 bond, and his travel was restricted to Massachusetts and Rhode Island.

"I'm not guilty of these charges. I've done nothing but good for the great city of Fall River," Correia said outside the courthouse. "And I'm going to continue to do great things for the city."

His lawyer, Kevin Reddington, said the indictment "reads like a bad John Grisham novel" and suggested the arrest was politically motivated.

"This is a case where there's no corroboration, no physical evidence, no legitimate witness," Reddington said. "The timing of this indictment is also troubling."

Correia is running in the city's preliminary election on Sept. 17. Once a rising political star , the Democrat has already survived a bizarre March election in which he was recalled by voters and then promptly reelected the same night.

Correia was arrested in October on charges he defrauded investors in a smartphone app he was developing.

Prosecutors say he used much of the $360,000 to pay for jewelry, designer clothing, a Mercedes and to further his political career. Correia has pleaded not guilty to those 13 counts. His trial is currently slated to start Feb. 24.

The latest investigation highlights the potential for abuse in Massachusetts' nascent retail marijuana industry, which launched in earnest last November with the opening of the first retail storefronts, authorities said Friday.

Under state law, a so-called non-opposition letter is required to become a licensed marijuana shop. The head of the local government issues the letters, which state they've verified the business is in a permissible zoning district.

Correia has issued at least 14 of the letters, including two for his current girlfriend's brother, authorities said. Lelling's office declined to say whether it's alleging illegal activity in issuing of the letters to the brother.

Authorities say the now-27-year-old mayor received cash and a Rolex watch from a property owner seeking city approvals. They also say he had his chief of staff, who also faces federal charges, give him half of her $78,780 salary in return for allowing her to keep her city job.

Genoveva Andrade, a 48-year-old Somerset resident, made her initial appearance Friday and wasn't required to enter a plea on extortion, theft and bribery charges. Her lawyer declined to comment afterward.

Three other associates are also charged in the marijuana extortion scheme and will appear in court later.