Verifying Pot Shops with a Smartphone 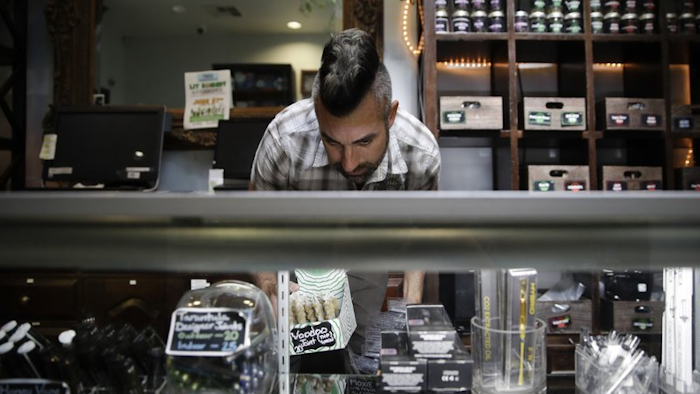 SACRAMENTO, Calif. (AP) — California marijuana users can now turn to their smartphones to find out if a dispensary is legit.

The Bureau of Cannabis Control on Thursday announced a program encouraging licensed cannabis retailers to post QR codes in their store windows. The checkerboard codes can be scanned by a cellphone camera linking the reader to the bureau's online license bureau.

That will allow consumers to verify that the store is licensed.

Consumers will be able to determine which retailers ”carry products that are tracked, tested, and legal,” Bureau Chief Lori Ajax said in a statement.

California voters legalized marijuana sales to adults under Proposition 64, passed in 2016. However, state regulators have struggled to meet the demand for licensing, and many communities have either banned commercial sales or not set up rules for the legal market to operate.

In addition, legal shops continue to be undercut by a thriving illicit market, where consumers can avoid taxes that can approach 50% in some communities.

The QR code program was applauded by the United Cannabis Business Association, which represents licensed retailers.

“When voters approved Proposition 64, there was an immediate assumption that overnight, everywhere that sold cannabis was legal and safe," Honig said in a statement. “Unfortunately, this couldn’t be further from the truth. California’s illicit market is nearly three times the size of its legal one and many consumers cannot tell the difference, leading them to unknowingly purchase untested and unregulated products that may put their health at risk."