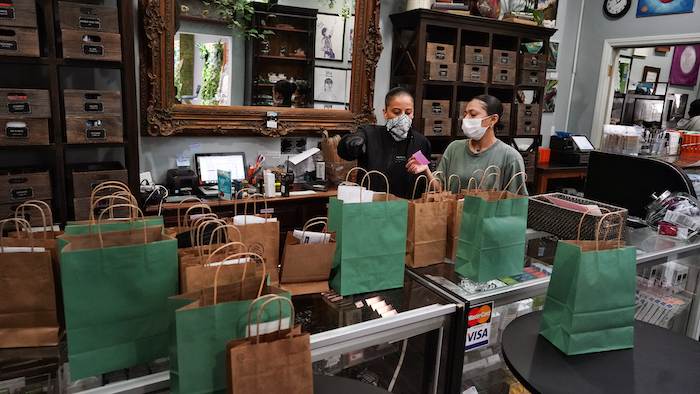 Los Angeles was once seen as a potential showcase for the industry, but that has never squared with the reality on the street: illegal shops continue to flourish, while licensed companies complain that just about everything costs too much and takes too long when dealing with City Hall.

Meanwhile, one of the expected pillars of the city's legal system — programs to assist those working in the business who were arrested or imprisoned during the war on drugs, including many people of color— has been slow to take shape.

The proposed revisions were greeted with a mix of applause and confusion.

They ranged from minor moves, such as tweaking a definition to match language in state law, to potentially major ones, such as limiting delivery licenses until 2025 only to businesses that meet so-called social-equity benchmarks. Those programs are aimed at helping operators who were arrested or convicted of a marijuana-related offense and lower-income residents who live, or have lived, in neighborhoods marked by high marijuana arrest rates.

The city's top cannabis regulator, Cat Packer, called the changes urgent. She noted the industry and the city have been buffeted by the coronavirus crisis, an economic downturn and unrest over racial injustice. Meanwhile, marijuana remains illegal at the federal level and big banks typically refuse to do business with pot companies because of the legal conflict between state and federal law.

The intersection "between cannabis policy and racial injustice is clear to me,” Packer said. “Black and brown communities ... have been disproportionately impacted, disproportionately policed, and we made a commitment to actively acknowledge those harms and address the harms of the drug war.”

Adam Spiker, executive director of the industry group Southern California Coalition, called the proposals a “mixed bag.” While well intended, he said placing an inflexible limit on who could qualify for a delivery license is “open to a lot of problems” since it could leave out longstanding operators deeply enmeshed in the industry.

“I think that creates more problems than solutions,” he said.

How the city issues licenses — and who gets them — has been at issue. In April, a lawsuit was filed against the city by license applicants claiming its process was flawed.

Other proposed changes approved by the Rules Committee would permit businesses to relocate while being licensed, clarify what employees are required to have background checks and streamline the application process.

Prior to the vote, the committee heard from a long line of industry officials and other speakers who alternately praised the proposals or depicted the city licensing system as dysfunctional.