Organizers said they submitted 420,000 signatures despite the challenges posed by the coronavirus. 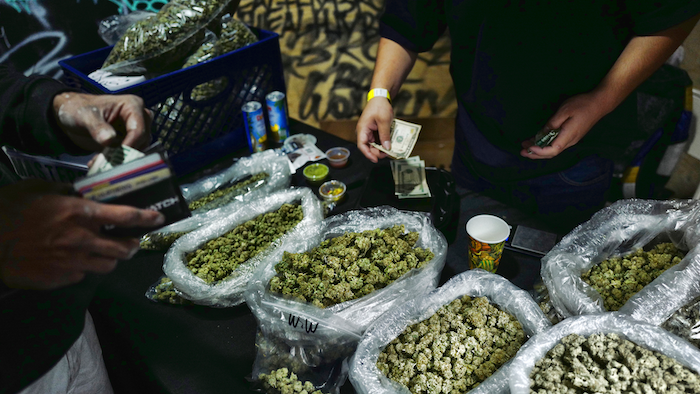 A vendor makes change for a customer at a cannabis marketplace in Los Angeles, April 15, 2019.
AP Photo/Richard Vogel, File

PHOENIX (AP) — Proponents of legalizing recreational marijuana in Arizona said Wednesday they turned in 420,000 petition signatures — far more than needed to get the measure on the November ballot despite challenges posed by the coronavirus.

Organizers of the Smart and Safe Arizona Act, which would legalize recreational marijuana use by people 21 and over, said they began gathering voters' signatures last September. By the time the coronavirus halted life as usual in March, the group had only about 300,000 signatures, spokeswoman Stacy Pearson said.

That’s more than the required 237,645, but initiative proponents usually get extras because many can be invalidated after vetting by the Arizona secretary of state and county recorders. The secretary of state has until near the end of August to decide if an initiative will make it on the ballot.

The pandemic put things on pause and forced the group to retool how it carried out its work, Pearson said.

“We had to figure out a way to continue to gather signatures safely in a way that’s never been done before,” she said.

Paid signature gatherers found places where people still visited despite restrictions, like hiking trailheads and grocery stores. Organizers set up a way for people to request a signature gatherer to come to their home, where they would wear personal protective equipment and keep a safe distance as someone signed.

Pearson has high hopes for the initiative, even after Arizona voters in 2016 rejected a different legalization proposal. She said the current proposal addresses some of the concerns opponents had four years ago, when the proposal failed at the polls by roughly 2 ½ percentage points.

Still, the latest measure also faces opposition, including from the Arizona Chamber of Commerce & Industry, which spent more than $585,000 against the 2016 measure.

Garrick Taylor, a chamber spokesman, said the organization wasn’t ready to say whether it will spend money to oppose the new measure because there may other ballot initiatives it wants to fight.

“Despite the assurances of marijuana proponents, more harm than good will result from legalization,” Taylor said in a written statement.

Pearson said that the initiative addresses concerns of the chamber.

Under the 2020 effort, employers are not restricted from keeping a drug- and alcohol- free workplace or from having policies restricting marijuana use by employees. The measure also doesn’t require employers to allow or accommodate the use of marijuana at work.

On top of the regular sales tax, the measure calls for a 16% tax on marijuana, which would fund the government's cost of administering the program. Whatever is left will be used for community colleges, infrastructure, roads and highways, public safety and public health. The measure also allows people who have been arrested or convicted of some marijuana offenses, such as possessing, consuming or transporting 2.5 ounces or less, to petition to have their records expunged.

“I think Arizonans have evolved on this issue," Pearson said. “Certainly, our polling shows it, and just the general support of the measure while we were gathering signatures (show) that Arizona’s there.”