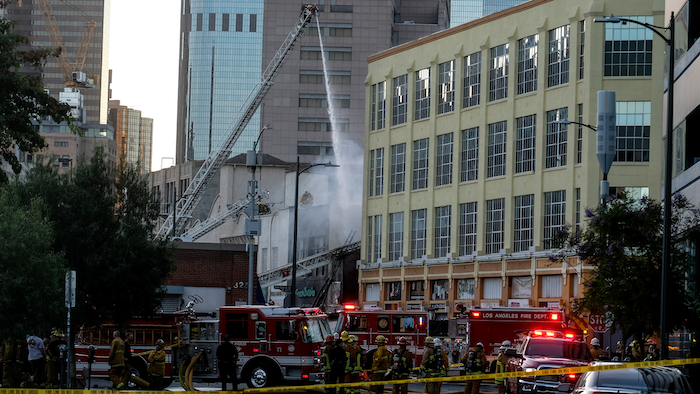 LOS ANGELES (AP) — The Los Angeles city attorney has filed dozens of criminal charges alleging fire code and safety violations against the owner of a building that exploded in the city's downtown and injured 12 firefighters, officials announced Friday.

The owner of the building faces up to 68 years in jail and thousands of dollars in fines if convicted, City Attorney Mike Feuer said in a statement. The city attorney can only file misdemeanor charges, not felonies.

A thunderous explosion rocked the building, which housed vape and marijuana accessories wholesalers, during the massive fire in May. Firefighters on the roof scrambled down ladders through the blaze, with their protective coats aflame.

“Everybody off the roof!” a firefighter shouted in scanner traffic captured on Broadcastify.com.

Some ran out onto sidewalks, where they tore off their burning yellow gear, including melted helmets. The wall of flames shot out of the building and burned seats inside a fire truck across the street.

The cause of the blaze remains under investigation.

The devastating Boyd Street fire — smoke from which could be seen for miles — prompted the city's fire chief, Ralph Terrazas, to order inspections of locations that house hazardous materials. The city attorney's charges — which were also filed against other building owners and operators in the area of the fire — came after those increased inspections.

“The fire and explosion that ripped through the Boyd Street property caused our firefighters great suffering — and came perilously close to costing their lives. We’ll do everything we can to hold the owners and operators of buildings and businesses responsible for complying with our fire and safety codes,” Feuer said in a statement. “The public is counting on us to protect them from a potential catastrophe.”

Prosecutors allege that Steve Sungho Lee, owner of the Boyd Street property and three others nearby, stored hazardous materials without proper permits, lacked the necessary sprinkler system coverage and failed to maintain a safe building.

Lee did not immediately respond to requests for comment Friday.

The operators of vape and marijuana accessories wholesalers Smoke Tokes, Green Buddha and Bio Hazard, which were located inside the Boyd Street property, have also been charged.

Bio Hazard's website includes a statement thanking firefighters saying they are cooperating with authorities in the investigation. The statement says Bio Hazard was not responsible for the destruction and that safety inspections are regularly scheduled.

Lee and the operators are scheduled to be arraigned in November.

Officials previously described Smoke Tokes as a supplier for makers of “butane honey oil,” and said carbon dioxide and butane canisters were found inside the building. But while it looked like the warehouse had “a lot of stored material,” Terrazas, the fire chief, previously said he hadn’t heard of any processing of materials or honey oil extractions taking place there.

Butane is an odorless gas that easily ignites. It is used to extract the intoxicating chemical THC from cannabis to create a highly potent concentrate also known as hash oil. The oil is used in vape pens, edibles, waxes and other products.