It would be the first state to use marijuana revenue to expand Medicaid coverage. 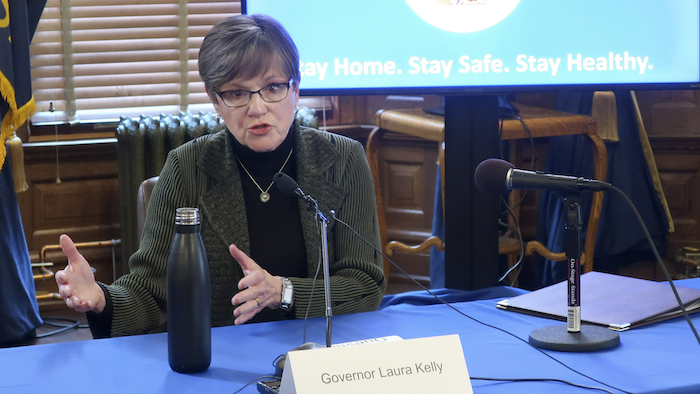 OVERLAND PARK, Kan. (AP) — Democratic Gov. Laura Kelly proposed Monday that Kansas should legalize marijuana for medical purposes and use the revenues to expand Medicaid health care for low-income residents, a top priority that the GOP-controlled Legislature has blocked over cost concerns.

Kelly's plan is sure to further rile the conservative Republicans who lead both legislative chambers, but it could make Kansas the first state to use revenues from legalized marijuana to expand Medicaid coverage. The National Conference of State Legislatures said it knows of no state that has done so.

The Democratic governor said during a news conference at a Kansas City-area health care software company's headquarters that she was making the marijuana proposal to counter GOP arguments that Kansas can't afford Medicaid expansion. She and other expansion supporters have dismissed those concerns because the federal government has promised to cover most of the costs, but the issue remains a key obstacle.

Kelly also is linking two issues that she argues have widespread appeal to voters ahead of her run for a second term in 2022 in her GOP-leaning state. Kelly championed Medicaid expansion in her first race in 2018 and promised to sign legislation legalizing medical marijuana, though she has not pushed that issue aggressively so far.

“I’m hoping they will set aside the political party differences and recognize that both components of this bill, Medicaid expansion and medical legalization are extraordinarily popular among their constituents," Kelly said during her news conference.

Kansas does not allow groups to put initiatives directly on the ballot, so supporters of legalizing marijuana and expanding Medicaid must go through the Legislature. Elections last year not only preserved Republican supermajorities in both chambers but left them more conservative.

“Governor Kelly envisions a Kansas where you can choose not to work and taxpayers will foot the bill for you to stay home and smoke supposedly medicinal marijuana,” Hawkins said in a text to The AP.

But University of Kansas political scientist Patrick Miller said he wonders why any Kansas politician still opposes medical marijuana. He said legalizing it has support across the political spectrum.

He said Kelly's plan could help her win over some swing voters and mobilize younger ones. In fact, he said, it's cautious on marijuana.

“She could probably put her neck out and support recreational weed and probably get a bigger payoff out of it and be fine,” he said.

The Legislature has taken only relatively small steps toward legalizing medical marijuana even as most other states have done it.

Missouri and Oklahoma used ballot initiatives to approve it in 2018, and other states — including Colorado — allow adult recreational use. Thirty-six states allow medical marijuana use and 15 allow recreational use by adults, according to NCSL.

Kansas legislators in 2019 created an industrial hemp research and production program and approved a law to protect from prosecution people who use cannabidiol oils to treat children with debilitating medical conditions. Later that year, a legislative study committee recommended considering a measure like a 2016 Ohio law that allowed treatments for about 20 conditions if the marijuana cannot be smoked, but the idea didn’t get traction last year.

Esau Freeman, a longtime Wichita legalization advocate and co-founder of the advocacy group Kansas for Change, said he and other backers of legalizing marijuana have reached out to Kelly repeatedly. He called Kelly's plan “a great place to start” even though he had not thought of linking legalization to Medicaid expansion.

“Perhaps the governor is seeing two very popular issues that will continue to put pressure on the rest of the Legislature to enact the will of the people,” he said.

Kelly's proposed $19.9 billion budget for the fiscal year beginning July 1 assumes that Kansas expands Medicaid for as many as 165,000 additional people at the start of 2022. Her spending plan projects that Kansas would spend $19 million and receive $541 million in federal funds to cover the costs of the first half-year of the expanded program.

She said legalizing medical marijuana could raise up to $50 million a year and her proposal “eliminates the argument” that Kansas can't afford Medicaid expansion.

“It's nice to see that she's finally admitting that it is going to cost money to expand Medicaid,” said Senate health committee Chair Richard Hilderbrand, a Republican from southeast Kansas.