When researchers injected peptides into the brains of mice, the mice had fewer memory problems caused by THC. 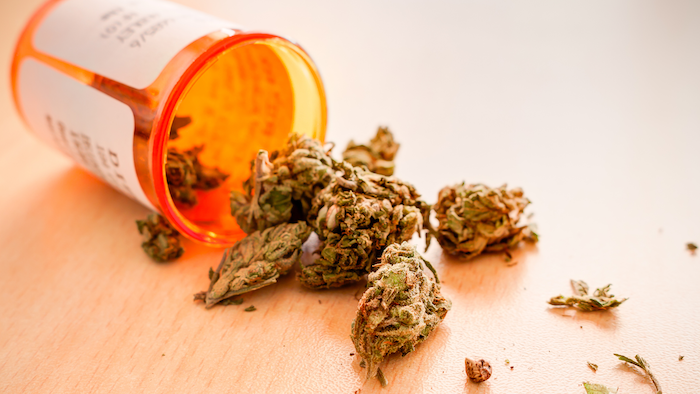 Many people live with chronic pain, and in some cases, cannabis can provide relief. But the drug also can significantly impact memory and other cognitive functions. Now, researchers reporting in ACS' Journal of Medicinal Chemistry have developed a peptide that, in mice, allowed Δ9-tetrahydrocannabinol (THC), the main component of Cannabis sativa, to fight pain without the side effects.

According to the U.S. Centers for Disease Control and Prevention, about 20% of adults in the U.S. experienced chronic pain in 2019. Opioids, the mainstay for severe pain management, are effective, but patients can easily become addicted to them. In some studies, medical marijuana has been helpful in relieving pain from migraines, neuropathy, cancer and other conditions, but the side effects present hurdles for widespread therapeutic use. Previously, researchers identified two peptides that disrupt an interaction between a receptor that's the target of THC and another receptor that binds serotonin, a neurotransmitter that regulates learning, memory and other cognitive functions. When the researchers injected the peptides into the brains of mice, the mice had fewer memory problems caused by THC. Now, this team, led by Rafael Maldonado, David Andreu and colleagues, wanted to improve these peptides to make them smaller, more stable, orally active and able to cross the blood-brain barrier.

Based on data from molecular dynamic simulations, the researchers designed two peptides that were less than half the length of the original ones but preserved their receptor binding and other functions. They also optimized the peptide sequences for improved cell entry, stability and ability to cross the blood-brain barrier. Then, the researchers gave the most promising peptide to mice orally, along with a THC injection, and tested the mice's pain threshold and memory. Mice treated with both THC and the optimized peptide reaped the pain-relieving benefits of THC and also showed improved memory compared with mice treated with THC alone. Importantly, multiple treatments with the peptide did not evoke an immune response. These findings suggest that the optimized peptide is an ideal drug candidate for reducing cognitive side effects from cannabis-based pain management, the researchers say.

The abstract that accompanies this paper can be viewed here. The authors acknowledge funding from Rhodes Pharmaceuticals, Marie Skłodowska-Curie Research and Innovation Staff Exchange, the Spanish Ministry of Science and Innovation and La Caixa Foundation.