Criminal groups also adapted during the pandemic by turning to shipping containers and commercial supply chains instead of human couriers. 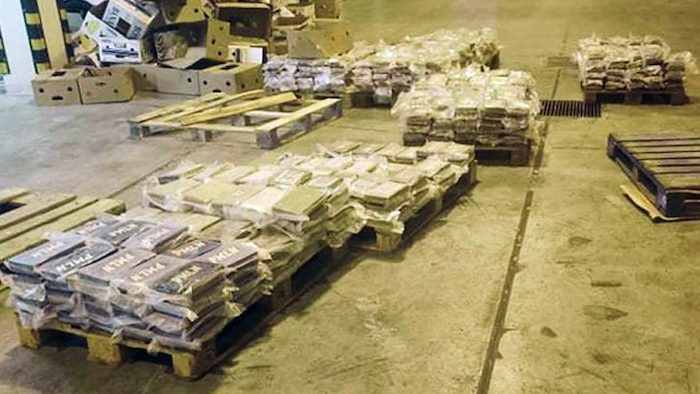 Packets containing cocaine, which were hidden in boxes of bananas, after it was seized by Customs Malta at Malta Freeport, June 8, 2021.
Customs Malta via AP

The report is produced annually by the European Monitoring Centre for Drugs and Drug Addiction drawing data from the European Union's 27 member countries, Turkey and Norway.

Its authors said that while strict stay-at-home orders in most countries disrupted street drug sales, the market moved to encrypted messaging and social media platforms for negotiating purchases and to home delivery services for distribution.

“This draws attention to whether a long-term impact of the pandemic could be the further digitalization of drug markets,” the EMCDDA report states..

There were 46 new drugs detected in 2020 alone, including new synthetic cannabinoids and opioids, the report said.

European Commissioner for Home Affairs Ylva Johansson said “the highly pure and potent substances” found in the surveyed countries were a cause of special concern.

Illegal drug usage in general, she warned, carries environmental, health and security risks for the EU.

The issue “corrupts the fabric of our society, fueling violence and risking the health and security of our citizens,” , Johansson said in a statement.

The EMCDDA described the European drug market as “dynamic and adaptive,” as well as “resilient to COVID-19 restrictions,” with patterns of drug use “increasingly complex.”

The report raises specific concerns around the misuse of benzodiazepines, which are prescribed for treating anxiety but have been linked to poisonings and deaths from unauthorized use.

Amphetamine and methamphetamine production is on the rise, the report said. Cannabis availability did not decline during the pandemic, according to 2020 preliminary data, it said.

Although cannabis use remained stable at high levels, authorities across Europe seized a record 235 tons of cocaine in 2019, up from 195 tons the year before.