The issue of whether lobsters feel pain when dropped into a cooking pot of boiling water is long-simmering. 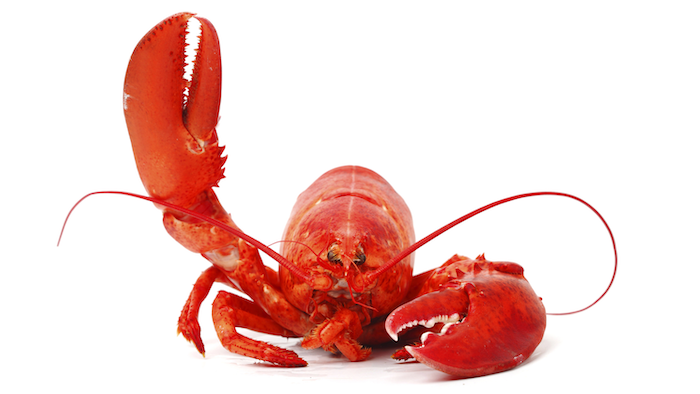 This lobster tale begins a few years ago when the proprietor of a northeastern seafood restaurant publicly asserted that exposing lobsters to a little cannabis prior to cooking produced notable changes in their behavior and a less dramatic scene in the kitchen for all concerned, which was the Maine thing.

In a paper published online June 29, 2021 in the journal Pharmacology Biochemistry and Behavior, a team led by researchers at University of California San Diego School of Medicine, report on efforts to answer that burning, boiling and baked question. They obtained live lobsters (Homarus americanus) from a supermarket and exposed the crustaceans to up to 60 minutes of vaporized Δ9-tetrahydrocannabinol (THC) -- the principle psychoactive component of cannabis -- then measured THC levels in the animals' tissues and looked for behavioral changes, including thermal nociception, the perception of heat or cold.

The issue of whether lobsters feel pain when dropped into a cooking pot of boiling water is long-simmering. Though live cooking of lobsters has been banned in Switzerland (2018) and New Zealand (1999), based on that presumption, most scientists say empirical evidence that crustaceans are sensitive or can even detect temperature changes is far from clear.

A study at Queen's University in Belfast, published in 2013, exposed the claws of shore crabs (Carcinus maenas) to electrical shocks. The crabs learned to avoid them, a behavior the study authors said was "consistent with key criteria for pain experience."

A 2015 study at the University of Texas-Pan American found that Louisiana red swamp crayfish (Procambarus clarkii) displayed nociceptive behavior (responses to extreme temperatures) when briefly touched by a soldering iron at 129 degrees Fahrenheit, but not to low temperature or chemical stimuli, such as capsaicin, the active component in chili peppers.

The University of Texas authors concluded the crayfish possessed some nociceptive behaviors, but cautioned against over-interpreting the results. "We wish to be clear that we are not claiming crustaceans generally, or even crayfish specifically, feel pain," they wrote. "We are claiming that crayfish detect and respond to noxious high temperature stimuli in ways that they do not to other potentially noxious stimuli."

Michael A. Taffe, PhD, professor in the Department of Psychiatry at UC San Diego School of Medicine and senior author of the newest study, and colleagues had already documented in 2016 that inhaled THC produced anti-nociceptive effects in rats, blocking pain detection, and reduced the rodents' body temperature and physical activity. Given the restauranteur's claims, they were curious whether THC acted similarly upon lobsters, which are a well-established animal model for neurological research.

"Lobster models have contributed much to our understanding of neurotransmission and neuronal circuits," said Taffe, "most notably in the work of (Brandeis University neuroscientist) Eve Marder, who began her work when she was a graduate student at UC San Diego."

Though primarily an aquatic species, lobsters are able to survive for hours to days out of water if their gills (located inside their carapace or shell) remain moist enough to function. The UC San Diego researchers set up a sealed tank in which residing lobsters would be exposed to carefully calibrated levels of vaporized THC for 30 or 60 minutes.

The scientists subsequently measured levels of THC in tissue samples from some of the lobsters, including gills, brain, heart, liver, tail and claw. Claw samples where boiled for 10 minutes to determine if THC levels were reduced or eliminated by cooking.

The behaviors of other lobsters were monitored before and after THC exposure for changes, such as more or less time spent moving around, distance traveled and speed. Lobsters also had their claws and tails dipped in water ranging in temperature from ambient to 118 degrees Fahrenheit for up to 15 seconds. (Human showers typically range in water temperature from 105 to 112 degrees F.)

Taffe said the results were mixed. The primary finding was that Maine lobsters are capable of absorbing vaporized THC into their bodies by gill respiration, based on tissue samples. They also exhibited less locomotor activity, similarly to THC-exposed rodents. Responses to different water temperatures varied: the warmer the water, the more rapidly the lobsters moved their claws, tail or antennae away from the liquid, but THC exposure had very minimal effect on detection of a hot water stimulus in the study.

"This is the first direct evidence of thermal nociception in lobsters," said Taffe.

But does that constitute feeling pain? Taffe and colleagues cannot say with certainty: Detection of a stimulus is not synonymous with pain. Lobsters responded to THC exposure much less dramatically than rodents in both behavior and response to adverse stimuli.

"The assertions of the restaurateur that lobsters can be affected by vaping cannabinoids appears confirmed by their subsequent behavior," said Taffe, "but the impact of THC on thermal nociception was minimal. You would need to do more experimentation to fully investigate behavioral outcomes, including anxiety-like measures, which we did not address."