The phenomenon has taken the industry by storm. 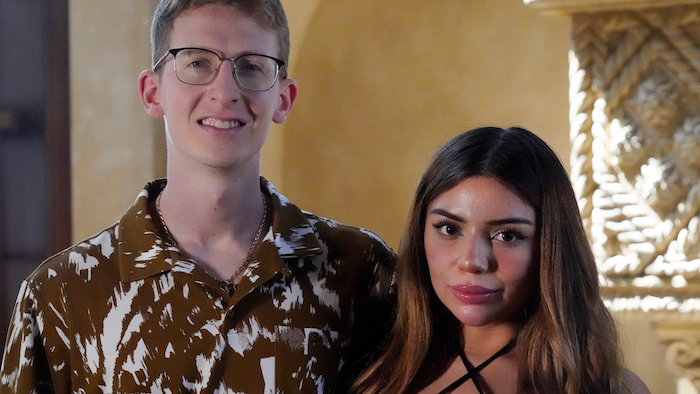 William Goodall, and Katiana Kay, his partner in their CBD online shop Bay Smokes, pose for a photo, Thursday, July 22, 2021, in Sunny Isles Beach, Fla. The two began selling delta-8 products in December with delta-8 quickly becoming a main source of revenue. The chemical, called delta-8 THC, is billed as producing a milder high than the better known delta-9 THC, and delta-8 is often marketed as being legal even where marijuana is not.
AP Photo/Wilfredo Lee

NEW YORK (AP) — A chemical cousin of pot’s main intoxicating ingredient has rocketed to popularity over the last year, and the cannabis industry and state governments are scrambling to reckon with it amid debate over whether it’s legal.

The chemical, called delta-8 THC, is billed as producing a milder high than the better known delta-9 THC, and delta-8 is often marketed as being legal even where marijuana is not. That argument stems from the fact that most delta-8 is synthesized from CBD, a popular non-intoxicating chemical that’s prevalent in hemp, a form of cannabis that Congress legalized in 2018.

Delta-8′s rise is “a phenomenon that has taken the industry quite by storm,” says John Kagia of cannabis industry analysis firm New Frontier Data, and it offers “fascinating insight into some of the growth and growing pains.”

There are no hard-and-fast statistics on sales of delta-8, which is available in vapes, gummies and other forms. It has been the fastest-growing segment of the market for hemp chemicals for roughly the last year, after wholesale CBD prices plummeted amid oversupply and other issues, says Ian Laird of data analytics company Hemp Benchmarks.

After a few years in the CBD business, William Goodall and partner Katiana Kay began selling delta-8 products through their online shop Bay Smokes in December. It quickly became a main source of revenue.

Goodall said that after talking to lawyers and suppliers’ chemists, he’s confident Bay Smokes products are safe and federally legal (other attorneys divide on how risky it is to sell delta-8). But the Miami-based company has had to filter out customers from a growing list of states that are prohibiting delta-8. 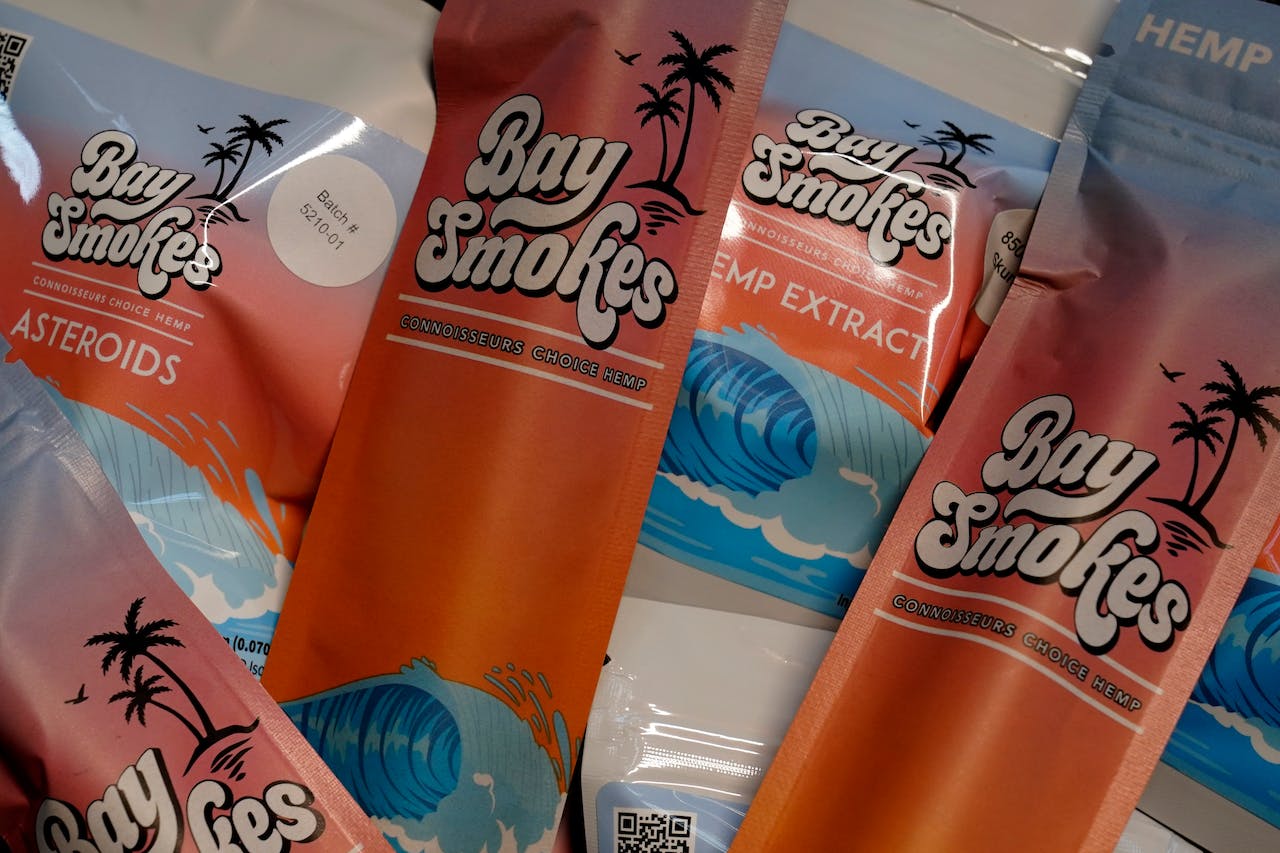 A small selection of products offered by William Goodall, and Katiana Kay, his partner in their CBD online shop Bay Smokes, are shown, Thursday, July 22, 2021, in Sunny Isles Beach, Fla. The two began selling delta-8 products in December with delta-8 quickly becoming a main source of revenue. The chemical, called delta-8 THC, is billed as producing a milder high than the better known delta-9 THC, and delta-8 is often marketed as being legal even where marijuana is not.AP Photo/Wilfredo Lee

Still, he’s sticking with it, figuring that legal markets for it will endure at least in states where marijuana is permitted.

“Ultimately, I think delta-8 is a great product,” he says.

But some other hemp businesses are steering clear.

“The easy money is tempting, but that’s not an avenue we wanted to go down,” says Gair Laucius, the chief scientific officer of Southbridge, Massachusetts-based CBD producer High Purity Natural Products. “There were too many unknowns.”

The 2018 federal law that OK’d hemp products said they couldn’t be more than 0.3% delta-9, but it said nothing about delta-8.

Enthusiasts interpret that silence as a green light for delta-8, and some officials also see an opening for it. Wisconsin’s Legislative Council, a research service for lawmakers, concluded last year that delta-8 products may qualify as hemp if they’re below the delta-9 threshold, though the council cautioned it wasn’t giving legal advice.

But within the last year, the federal Drug Enforcement Administration has said that “synthetically derived” THC and delta-8 specifically are top-level controlled substances — effectively illegal, except for strictly limited research.

There’s not much research on delta-8, especially in people, though a small 1995 study said it showed promise as an anti-nausea treatment in child cancer patients. But officials in states such as Colorado and Washington worry that converting CBD to delta-8 could produce harmful byproducts, at least in some cases.

Over 10 other states’ controlled substance lists include delta-8, sometimes under a different name. Lawmakers in more than a dozen other states, from Alabama to Hawaii, have made or considered some move on delta-8 this year.

Some sought effectively to ban it. Others aimed to allow but regulate it much like their legal marijuana markets, concerned that intoxicating delta-8 items were being sold at gas stations, convenience stores and elsewhere without the same standards and limits that apply to pot dispensaries.

“It is still a form of cannabis that can get you high, and it is unregulated and untested,” says Jacqueline McGowan, a California cannabis licensing consultant and candidate for governor. Proposed legislation in California would require testing and taxation of consumable “noncannabis cannabinoids,” including delta-8.

In Oregon, newly passed legislation gives the state Liquor Control Commission authority to limit THC — of any kind — in products sold to minors, among other provisions. Commission research director TJ Sheehy says it will ensure consumer safety without outlawing delta-8 for adults.

Texas lawmakers hit an impasse this spring over a measure that producers said would have barred delta-8 from consumable hemp products.

House sponsor Rep. Tracy King, a Democrat from a rural district, says he “just wanted to do something to help the growers and the processors” by stripping that measure out of proposed hemp legislation that was heading toward passage. It ultimately stalled as the legislative session ended.

The U.S. Hemp Roundtable, an industry group, fears that portraying delta-8 products as hemp with a high could jeopardize the plant’s hard-won federal legal status. But another group, the Hemp Industries Association, worries that lawmakers are rushing to crack down.

Delta-8 is getting onto law enforcement’s radar, too, prompting raids of shops in multiple states.

In Wisconsin, Waukesha County authorities alleged in April that a CBD shop was offering products labeled as delta-8 THC that actually contained illegal amounts of delta-9. Authorities say they started investigating after two children accidentally ingested products their parents got at the Superstar Buds store in Menomonee Falls, near Milwaukee.

Shop owner Chris Syrrakos denies the allegations and says authorities haven’t given him detailed testing results. No criminal charges have been filed to date, though prosecutors have brought a civil forfeiture case involving about $14,000 seized in the probe.

“Delta-8 came to the rescue and saved our life” as a business, enabling six new hires, Syrrakos said. “Then, all of a sudden, everything came crashing down with the police raid.”

He has since closed the shop but opened a new one in Milwaukee.