A lack of government regulations has allowed the nation’s hottest cannabis market to flourish in an unlikely place.

Despite its well-earned reputation for deep-red politics, the Denver Post reports that Oklahoma is now home to a “green rush” three years after voters approved medical marijuana.

Oklahoma is one of several conservative-leaning states to endorse either medical or recreational marijuana in recent years — a reflection of increasing support for relaxed cannabis policies across the political spectrum. But unlike in other states, the measure approved in the Sooner State put almost no restrictions on the new industry.

Cannabis companies face no restrictions on farming operations, grow sizes, or dispensaries, while doctors can virtually authorize medical cards licenses in minutes, with no requirement to diagnose patients with a qualifying medical condition.

What’s more, business license fees are a fraction of the prices in other states, while land remains relatively cheap and readily available. A program to track the state's marijuana crops through the supply chain, meanwhile, is mired in a legal dispute.

Ambitious cannabis entrepreneurs are buying up large swaths of land to take advantage of the market as Oklahoma becomes the most marijuana-laden state in the nation. The state features seven times as many grows as Colorado and twice the number of dispensaries. It is home to by far the most medical marijuana plants per capita, and the percentage of its population with medical cannabis cards is the highest in the nation.

The rapid growth of the state’s marijuana sector, predictably, has caused problems. The demand for farming property has dramatically increased land prices — which are often paid in cash — while law enforcement alleges that illegal grows are mistreating workers while sending the drug out of state.

“We know how this story plays out,” Brookings Institution cannabis analyst John Hudack told the Post. “We saw a less permissive system operate in Oregon, and they ended up with hundreds of thousands of pounds of excess inventory.” 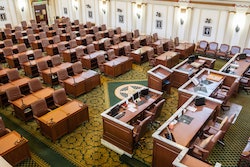