Judge to Toss Some of Ex-Mayor's Convictions

He solicited bribes from marijuana vendors in exchange for city approval. 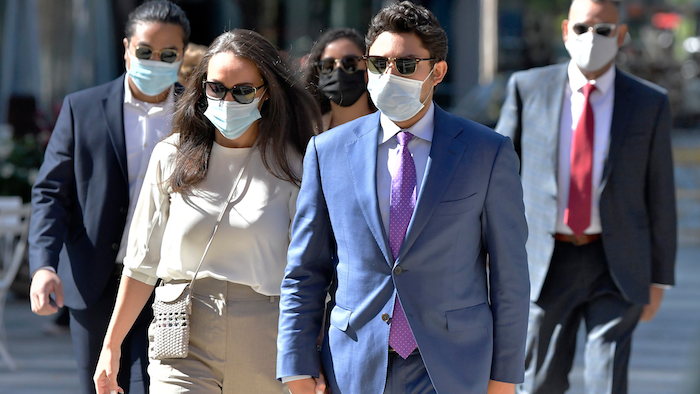 BOSTON (AP) — A federal judge on Monday said he planned to toss several convictions against the Massachusetts mayor elected at just 23 years old who was found guilty by jurors of bilking investors and extorting hundreds of thousands of dollars from marijuana businesses.

Corriea, who maintains he is innocent, would remain convicted of multiple counts of wire fraud, extortion conspiracy and extortion. He's expected to be sentenced on Tuesday, and prosecutors had been seeking 11 years behind bars, pointing to what they described as Correia's continued defiance.

“The betrayal of people who considered him like family, the pervasive lying, cheating, stealing, and blame-shifting, and the egregious breaches of the public trust must be met with a sentence that thoroughly repudiates the defendant’s abhorrent conduct and deters both this defendant and others like him from doing it again,” Assistant U.S. Attorney Zach Hafer wrote in court documents.

Correia, now 29, had originally been scheduled to receive his punishment on Monday, but the judge said he was unpersuaded that there was enough evidence to back up several fraud counts. Those stemmed from allegations that Correia misused money he got from investors who backed his smartphone app called “SnoOwl” on lavish purchases for himself and his then-girlfriend.

Before the judge made his comments on Monday, Correia’s lawyers had asked for three years behind bars. They said in court papers that the former mayor “cannot be defined solely as a ‘crooked politician’ or ‘thief,’” and told the judge that Correia has “great potential to learn from this chapter of his life.”

“This case evokes the legend of Icarus. Mr. Correia flew early, high, and fast. The verdict points to a hubristic loss of moral compass and, now, a crash into the sea. But Mr. Correia’s story need not end there,” Correia's defense attorneys wrote.

The charges against Correia in 2018 marked a stunning collapse for the politician who was elected on a promise to rejuvenate the struggling mill city and was once seen as a rising Democratic star.

Prosecutors alleged that Correia looted a bank account of funds investors gave him for his smartphone app to buy things for himself and shower his girlfriend in expensive gifts. Prosecutors said he spent investor funds on dinners at high-end restaurants, luxury hotels, casino trips and such lavish items as a Mercedes, a helicopter tour of Newport, Rhode Island, and a $700 pair of Christian Louboutin shoes.

Throughout his trial, prosecutors depicted him as a greedy liar who misled those who pumped money into his app the same way they say he deceived voters to get elected by portraying himself as a successful entrepreneur. Investors told jurors that they had been impressed with Correia and trusted him to use their cash to build up the business and make them more money.

After becoming mayor in 2016, prosecutors say Correia began soliciting bribes from marijuana vendors in exchange for letters of approval from the city they needed in order to get a license. During the trial, prosecutors had one vendor use fake money to show jurors how he said he stuffed $75,000 in cash in a metal box clipboard before handing it to Correia in the mayor’s city-issued vehicle.

Correia was found guilty in May of extortion, extortion conspiracy, wire fraud and filing false tax returns after 23 hours of jury deliberations over four days. The jury acquitted him on three counts, including accusations that he forced his chief of staff to give him half of her salary in order to keep her city job.

Correia — who did not take the stand in his defense — told reporters after his conviction that “the real truth” would come out and predicted he would be vindicated.

He hired new attorneys, who filed papers in July urging the judge to throw out the jury’s verdict. They slammed prosecutors for what the defense described as an “unfair smear campaign in the courtroom” and called the evidence against Correia “remarkably shallow.”