He extorted money from marijuana companies.

BOSTON (AP) — A federal judge has dismissed two more charges faced by a disgraced former Massachusetts mayor and ordered him to repay more than $300,000 to investors in his smartphone app, according to court records.

After throwing out two tax charges Monday, Judge Douglas Woodlock has now thrown out 10 of the 21 counts of which former Fall River Mayor Jasiel Correia was convicted in May. He remains convicted of 11 counts for defrauding his investors and for extorting money from marijuana companies who wanted to do business in the city.

The latest acquittals do not affect Correia’s sentence. Correia, 29, was sentenced last week to six years in prison and three years of probation.

Woodlock also ordered Correia to repay five investors in the app a total of $310,240, according to court documents.

Woodlock also denied Correia’s motion for a new trial. Correia, who was first elected at age 23, maintains his innocence. 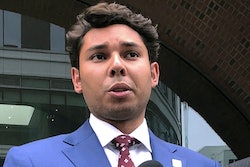