How intentional production will solve one of cannabis producers’ biggest challenges: making a consistent product.

David Kessler started cultivating cannabis early in life, but he quickly became enraptured by the diversity in genetics and the differences in the aroma and effects from plant to plant. He started down a road of loving not just cannabis, but plants in general — along with an appreciation for the vast genetic diversity that cannabis can offer.

Kessler says that the goal for cultivators is not to create a utopian environment to grow the healthiest plants possible. Instead, cultivators want to elicit a particular outcome from a plant. For example, some companies are growing for oil extraction instead of cut flower, and some are cultivating it to have more bag or aesthetic appeal. To get a desired outcome, cultivators need to stress cannabis plants out. More specifically, growers need to apply controlled stressors and then withdraw them to allow the plants to recover. People are trying to grow a perfect plant in an optimized environment, but to get the best outcome, they need to adjust the environment intentionally.

Kessler believes the industry is moving into an era of intentional cannabis cultivation in which growers use new science, data and granular control over the cultivation environment to elicit the best response from the plant.

Agrify uses a different approach to cultivation. When the company started up, it looked at the industry as a whole and realized that one of the biggest challenges for producers was trying to produce a consistent product. Companies would produce phenomenal batches of flower, followed by middling crops with a 5-6% change in cannabinoids. That level of inconsistency wouldn't be acceptable in other markets, or in an FDA-regulated world.

When Agrify looked at the variables that cause these deviations, they almost always came down to the environment: nature vs. nurture. So Agrify developed an ecosystem, including software, hardware, infrastructure and consumables, that support a process that achieves consistency.

Agrify took cultivation and miniaturized it down to a 300-cubic-foot growth chamber it calls a vertical farm unit (VFU) with two layers of canopy and granular control over everything from light intensity and quality to temperature and humidity and nutritional mixes – down to the milliliter and second. The VFUs provide precise control, and each chamber collects 1.5 million data points each year that are used to precisely recreate the environment. VFUs minimize environmental variation from crop cycle to crop cycle.

The VFUs need to be placed into a climate-controlled envelope, which means they can't just sit in a cold warehouse. They are rigid, self-supporting and stackable structures that don't require infrastructure like posts or anchors. The VFUs use a chilled water system and boiler system to control cooling, which provides more independence when removing heat or humidity. They also have two-stage dehumidification and can inject carbon dioxide as needed.

The VFUs not only help with cannabis crop consistency, but also reduce the learning curve for new strains. 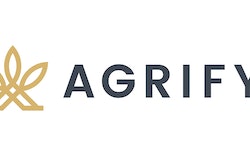 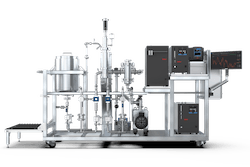 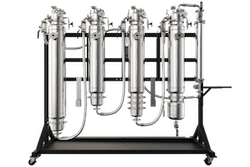