Cannabis operators may not be able to control the weather or the price of cannabis, but they can control the amount of labor that goes into making pre-rolls

Charles Warner was a magazine publisher who had worked in various industries when he saw an opportunity in cannabis and the innovative products designed for the industry. So he launched Cannabis & Tech Today, a resource that helps industry professionals keep the pulse of innovation in the space. Warner is also one of the first four principals, the chief marketing officer, who helped get STM Canna off the ground.

Based in Spokane, WA, STM Canna is a veteran-owned company that manufactures pre-roll-making equipment, including grinders, weighing and closing machines and the company's wildly successful RocketBox. According to Warner, when STM started in 2017, it was sort of a "ready, fire, aim" mentality as the company tried to find its place in the industry. As a result, STM went in a couple of different directions, starting with mobile trimming and then developing a rosin press that wound up being about five years ahead of its time. They had a lot of good ideas but nothing that was a perfect fit to fill the current demand.

The company set its sights on pre-rolls and STM's "mad scientist" founder and CEO Jason Dueweke got to work. Dueweke is the chief engineer behind STM's products. Once they refocused on the pre-roll, he dialed in the tech to make it easier for operators to produce pre-rolls. Pre-rolls were notoriously labor intensive and inconsistent and thus a good target to automate.

In 2018, STM Canna debuted the RocketBox, a straightforward commercial pre-roll machine that the industry welcomed with open arms. The product's success opened the door to creating a product portfolio of modular equipment primarily targeted toward pre-roll production.

Alex Morton, channel sales manager at STM, joined the team around 2020. Before he came to STM, he was developing an application to help food industry workers pick up seasonal jobs when he met Nate Lipton from GrowersHouse and CannaCribs. Lipton was one of Morton's business mentors as he tried to get his app off the ground, and Morton found himself becoming enamored with the cannabis industry. He started working on CannaCribs, a take on the MTV show, "Cribs," selling advertising. The show opened many doors for Morton, who met the team at STM Canna, fell in love with the technology and eventually moved into a sales position.

Morton says STM focuses on the four aspects of making a pre-roll:

According to Morton, many clients start with a Mini RocketBox, a smaller, more economical pre-roll filling machine that can fill 143 joints every 45 seconds. It's a cheaper model, and companies can scale up the equipment with demand. The RocketBox 2.0 can fill 453 pre-rolls per cycle and up to 25,000 daily.

STM's equipment has a modular design, enabling clients to scale slowly without springing for a $500 million machine out of the gate. The equipment is also relatively small, which is ideal for start-ups that don't have a lot of space to dedicate to pre-roll production. STM has solutions for companies of all sizes, from the big players doing hundreds of thousands of joints per week to the small mom-and-pop doing 100 CBD joints daily.

The equipment has cut pre-roll labor in more than half for some clients, which is vital for operators struggling to find good labor in a tricky market.

STM recently moved into a new production facility in Washington and has several machines currently under development. Many of the company's ideas for new features and products come from customer feedback — directly from the people using it on the floor. The feedback is how STM created the weigher and closer after hearing complaints regarding the biggest bottlenecks for pre-roll makers. It also birthed new features on legacy products, like installing the RocketBox's touchscreen on the equipment.

Reverse compatibility is also essential for the company, which creates retrofit and adaptor kits to ensure that legacy products remain fully functional and compatible with new equipment.

The company's newest product, the Jojo automatic cone loader, will debut next week at MJBizCon in Las Vegas. Until now, cones needed to be loaded into the RocketBox manually. STM will also make joints on the tradeshow floor and offer one-on-one demonstrations. Cannabis & Tech Today has a host of surprises for attendees, including giveaways (like a Mini RocketBox) and a scavenger hunt.

Cannabis operators may not be able to control the weather or the price of cannabis, but they can control the amount of labor that goes into making pre-rolls, and STM Canna hopes to continue innovating new products that help pre-roll manufacturers and other cannabis operators continue to succeed. 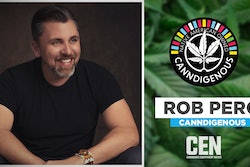